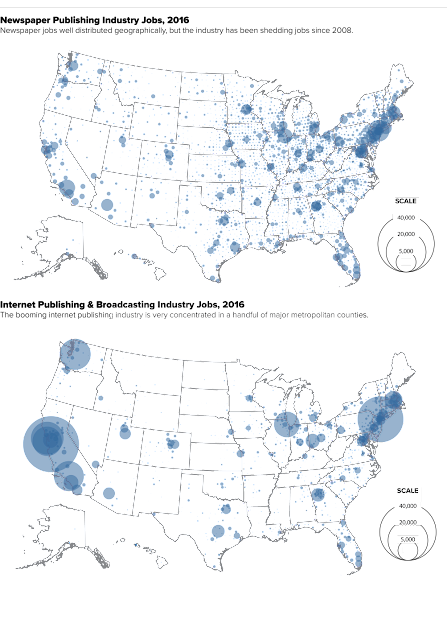 Politico says the real reason the media missed the Trump story is that they are clustered in places
which are completely out of touch with the rest of the country.   See maps.

We thought the problem was the total leftest bias, but it is much more serious than that.

"Former New York Times public editor Daniel Okrent got at this when he analyzed the decidedly liberal bent of his newspaper’s staff in a 2004 column that rewards rereading today. The "heart, mind, and habits" of the Times, he wrote, cannot be divorced from the ethos of the cosmopolitan city where it is produced. On such subjects as abortion, gay rights, gun control and environmental regulation, the Times’ news reporting is a pretty good reflection of its region’s dominant predisposition." And now the  Times-ian ethos flourishes even in the new internet media. They too have clustered themselves in major cities—Los Angeles, New York, Boston, Seattle, San Francisco and Washington. "The Times thinks of itself as a centrist national newspaper, but it’s more accurate to say its politics are perfectly centered on the slices of America that look and think the most like Manhattan."

"If the burning humiliation of missing the biggest political story in a generation won’t change newsrooms, nothing will. More than anything, journalists hate getting beat." Do we hold our breath?