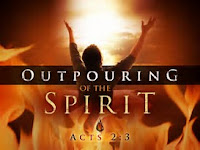 This is Pentecost season, and I just came off  celebrating it on TV with Pope Francis and tens of thousands of Spirit-Filled people in Rome from all over the world.   For any of you who are not clear about Pentecost, it is the day that the Christian Church began.


“When the day of Pentecost had come, they were all together in one place. And suddenly there came from heaven a noise like a violent rushing wind, and it filled the whole house where they were sitting. And there appeared to them tongues as of fire distributing themselves, and they rested on each one of them. And they were all filled with the Holy Spirit and began to speak with other tongues, as the Spirit was giving them utterance.” Acts 2:1-4)

From then on the Pentecostal experience of speaking in a new private language of the spirit became the evidence for being a believer as seen when the first Gentiles became Christians:


“ While Peter was still speaking words (to those first Gentiles), the Holy Spirit came on all who heard the message.  The (Jewish) circumcised believers who had come with Peter were astonished that the gift of the Holy Spirit had been poured out even on Gentiles. For they heard them speaking in tongues and praising God.(Acts 10:44-46 NIV).

If you are Christian and have not yet received your special spiritual language, and you feel there has to be more than what you have, I would recommend you keep asking God for the gift until He gives it to you. (See Luke 11:13)

Being a Christian without your prayer language and the evidence of the full infilling of the Holy Spirit is like driving an old car with the transmission dragging on the road as opposed to being in overdrive in a supercharged vehicle.  Pentecost Day is a great day to be a Christian!