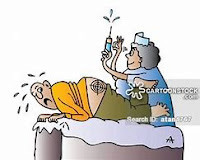 As I was writing the article on vaccination, I took a trip down memory lane.

At school in first through eighth grades, I had classmates who suffered from Scarlet fever, Mumps, Measles, German measles, Chicken pox, Whooping cough and Polio. We had no vaccines, (other than tetanus). The only weapon was quarantine which was like incarceration to us kids. One time I suspected my next door neighbor for outing me for mumps. So, I put a big sign on her fence saying MUMPS LADY. We stayed enemies from then on.

My uncle had been crippled as a child with polio so the big bugaboo for our family was that disorder.
It was a great relief when in 1955,  the vaccine for polio ended that terror.

I don’t know what vaccines I got in the service. But, what I do remember was they lined us up in a huge room. Then an officer announced we could expect some would faint. At that moment we heard the thuds of bodies crashing to the floor.

When I went to Peace Corps Honduras, I received another round of vaccines, some boosters and some new like Typhoid Fever, and Typhus. Only the Typhus shot bummed me out for 24 hours. I remember our five year old son as not too hot on getting shots. Big nurse shoved him flat, smacked him on the buttocks commanded "Stop that!" When he looked at her startled, she said: "What are you hollering about, I already gave you your shot when I popped you." We all had a big laugh at that.

These days, my wife and I take every shot recommended. Every year we have a flu shot. We have been vaccinated with both Pneumonia shots. We’ve had both Hepatitis immunizations as well as vaccination for Shingles and boosters for Tetanus and Diphtheria

So, given that long history of shots and good health, you might understand why I have a problem with the people who resist vaccinations. Especially when they endanger the rest.
Posted by Blogger at 6:00 AM

It is a mater of personal preference.

When I was in the military (Vietnam Era) in basic training you walked through a gauntlet of medics armed with airgun shots. While you were looking at the shot in your left arm they would hit you on your right flank then you are looking at the right and they hit you on the left. I don't remember how long the gauntlet was, but it seemed like a long walk. I don't know how many shots we got but it was plenty. A few passed out. The only shot I can remember a problem with was the Flu vaccination. A few died on the base from the Flu shot but that might have been at a later time after basic.

I had Measles and Mumps as a kid, I lived. I am going to get the Shingles vaccination and the Pneumonia vaccination and let the chips fall where they may. There is a lot of disinformation about vaccinations, but I agree with Johnny Rico in the statement about Autism. Doctors say vaccines don't cause Autism but they don't know what does.