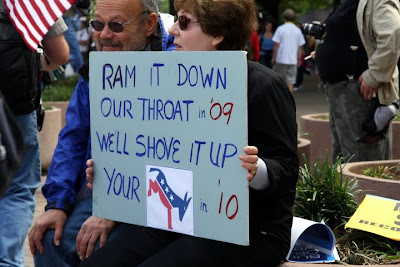 Email ThisBlogThis!Share to TwitterShare to FacebookShare to Pinterest
Labels: 2010 election

2010 will tell us if young people stay involved and if the know nothing movement ( think Sarah Palin )gets traction.

We all will know if the Glen Becks, hate radio , fear media are not only bad for America and the world but bad for the Republican party.

Are you afraid, POV. It looks as if your hose of cards is about to fall.

Thank you D.Webster your constructive criticism is helping me to improve myself.

Agreed Sark. We have an election going on in Boone right now.

The conservatives here need to find their candidates to run in next years election, and start organizing.

The only thing that conserns me is Democrats won't fight for the thing they were elected to do like Universal Health Care, ending the war in Iraq, finding answerss to the middle east, investing in infustructure ( High speed trains, bike trails , schools, inter cities, safe streets, cleaner enviroment)

You side acting as spoiled children with make believe issues ( death panels, socialism, brithers and what ever the hate industry can pull out of their ass) does not concern me.

POV is now making excuses for the defeats of his side in the up-coming elections that haven't even happened yet. They are "just incase" excuses.
Yet he doesn't mention that the true picture of ultra-liberalism has shown it's ugly head and a majority middle/conservative America has realized it and is fighting back. He doesn't admit that Obama during his primary and election campaign went more center and was elected under false pretenses. Now America knows what conservatives knew before the election.
HOPEfully there is not too early a peak.

I hear you whistling in the graveyard of liberalism, POV.

Great video Sark. I bet it will be on TV soon.

– for the first time in the Obama presidency – says the U.S. is headed down the wrong track, according to a Wall Street Journal/NBC News poll conducted Oct. 22-25.

52 percent say the country is on the wrong track compared to 36 percent who say it is headed in the right direction with 9 percent saying conditions are mixed and 3 percent undecided. While there have been pluralities saying the U.S. is on the wrong track in four of the previous five WSJ/NBC polls during Obama’s presidency, this is the first time the number broke 50 percent. The one month where that was not true was April when 43 percent said things were on the right track and an equal number said they were going in the opposite direction.

If you get a chance, please sign this petition, promoted on the Dennis Miller radio show:

Near Fredericksburg , Texas , where there is a large German-speaking
population, a farmer walking down a country road notices a man drinking
from his pond with his hand.

The man shouted back: "I'm from New York and just down here campaigning
for Obama's health care plan, I can't understand you.
Please speak in English."

The farmer replied: "Use two hands, you'll get more."

2,000 pages - the health care bill. Years and years of lawyer work ahead, so complicated it can be anything, so complicated a small business will be afraid to do anything in the way of hiring. This is the Left's economic sabotage awaiting the head saboteurs' signature.

I ran across an interesting comment last night on Fox News. It concerned the gubernatorial elections in New Jersey, Virginia, and the House race in New York. The commentator echoed the belief held by myself and many others on this blog that if the Republicans do not stop nominating liberal Democrat wanabes, then there will be conservative third party or Independent candidates running against them. He went a little further, saying that it would not surprise him if Sarah Palin lead a ticket as the head of a third party that would represent the center-right. In his opinion, if this were to happen it would draw enough voters from the Democrats, the Republicans,and independents to be victorious. He did say a lot would depend on how Palin would be able to counter the vicious attacks made on her during the last election by the left wing fringe (mainstream) media and the Obama propaganda machine during her upcoming appearances to promote her new book.

I think this is going to force the Republicans to wake up and smell the coffee or they are going to fall by the wayside. Any opinions?

I would also like POV's comment's on the questioning of the squirming NFL official concerning Rush Limbaugh's attempt to be a part owner in the league.


Jesse Jack son's Newest Staff Member
Even I can't make up "facts" better than this!

IS THIS A GREAT COUNTRY OR WHAT?
CONFIRMED BY: http://www.snopes.com/politics/sexuality/reynold

It figures. The Pelosi Plan will punish states that limit trial lawyers’ winnings.
Capital Confidential reported this at Big Government:

Section 2531, entitled “Medical Liability Alternatives,” establishes an incentive program for states to adopt and implement alternatives to medical liability litigation. [But]…… a state is not eligible for the incentive payments if that state puts a law on the books that limits attorneys’ fees or imposes caps on damages.

Tort reform could save the country $54 billion.
So it only makes sense that democrats would oppose it.

Another low-class nasty wing-nut sign. It's a crying shame what the party of Lincoln has devolved into.

Anonymous, what in the world is it that you are attempting to say? What sign? You have to make a coherent post if you want to make a point?

Guy Faulkes - the vulgar sign held by the wing-nut in the picture. Typical of low-class trash.

Is that you in the photos with the silly grin?

Anonymous, that sign is not ugly. It is humorous and truthful. You seem afraid. Very afraid. If I were an Obama supporter, I would be also.

POV, I did not see anyone with a silly grin. Maybe you saw a reflection on your monitor screen.

A'mous assumes the people in the picture are Republicans. Yet there is nothing in the picture showing their Party affiliation. The Tea Parties probably had as many Independents and third Parties as any political rally has ever had. A'mous also pretends to be morally offended by the picture.
Liberals are liars, plain and simple.

Sarkezien - you are being disingenuous. The sign was clearly a crude slur on Democrats and that is the hallmark of the current Republican party. As is general carelessness and stupidity such as this - http://www.opednews.com/populum/diarypage.php?did=14573

Anonymous, you really do not want to go with a spelling contest when you have POV on your side. Having said that, I am guilty of misspelling words every day as probably are you.


I wrote that you were being untruthful writing that you were offended by the language on the sign. I am sure you saw the signs at the Michael Moore sponsored march at the Republican Convention that put President Bush over the top in his last election.