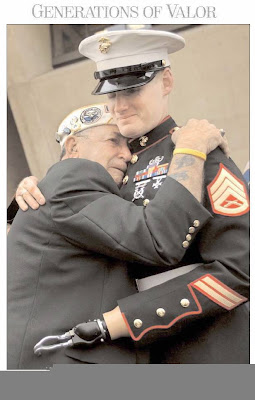 This is one of those photos that say so much it makes you speechless. I have been meaning to post for some time, but every thing I come up with strikes me as being inadequate. Do they give a Pulitzer for photography?

The Wolf sent me this in an email. I do not know if it is true, but if it is not it should be.

A United States Marine was attending some college courses between assignments. He had completed missions in Iraq and Afghanistan . One of the courses had a professor who was an avowed atheist, and a member of the ACLU.

One day the professor shocked the class when he came in. He looked to the ceiling and flatly stated, GOD if you are real then I want you to knock me off this platform. I'll give you exactly 15 min.'

The lecture room fell silent. You could hear a pin drop. Ten minutes went by and the professor proclaimed, 'Here I am GOD, I'm still waiting.'

It got down to the last couple of minutes when the Marine got out of his chair, went up to the professor, and cold-cocked him; knocking him off the platform.

The professor was out cold. The Marine went back to his seat and sat there, silently.

The other students were shocked and stunned, and sat there looking on in silence. The professor eventually came to, noticeably shaken, looked at the Marine and asked, 'What in the world is the matter with you? 'Why did you do that?'

The Marine calmly replied, 'GOD was too busy today protecting America 's soldiers who are protecting your right to say stupid stuff and act like an idiot. So He sent me.'

The classroom erupted in cheers!

If you think you know god but you want to live life by an overly-simplified code of hate, spite and fear, don't post silly allegories online.

A fireman steps back from the rubble of a house that has just collapsed
and killed two members of his engine company and three children who were
trapped inside by the fire. With tears in his eyes, he laments out loud.
"There is no living god who could allow this. If there is a god let him
strike me down right here right now, too."

After several moments, a disheveled man in a a beard and Islamic prayer
robe steps forward and strikes the fireman down, knocking him unconscious.
"Allah was busy, so he sent me." the man says.

How do you react and who do you side with, guy? Which is stronger....your militantly extremist Christian view on blasphamy or your xenophobic prejudice against all things Islamic?

All things Islamic? Is there no liberal with the sense G_d gave a goose? What in life disrupts the thought process so completely as liberalism?

Were you offended as a devout atheist by the USMC joke? Is your devotion to your belief so strict that it doesn't allow criticism of your belief?
Is it part of your dogma to lash out at anyone not believing as you do?

Your prejudice against any kind of religion is absurd. The marine example is a case of an absence of faith being pushed on others. The Muslim example is a case of faith being tested. When one's faith is tested, then others should help those being tested regain their faith if that is their desire. If an atheist such as you is actively harrasing those that beieve, then a good punch in the nose seems reasonable to me. After all, the Marine did not say "I will cold cock you if you o not believe in God." God sent him to answer the professors prayer. In your Muslim rewrite, the prayer was not answered as the fireman was merely knocked unconscious, not struck down as he asked to be. I hope you can argue cases more skillfully than this. Why have you abandoned your blog name?

As I have said repeatedly, not all Muslims follow lesser jihad. I have no problem with those that do not.

Boy, did you guys run away from that picture!

A picture's worth a thousand words. The picture says it all. Hard to add anything.

Your version of the USMC joke wouldn't be that funny as it doesn't relate to reality . Now if you had written:
"So the Muslim blew up everybody in the room including himself ", that would have been funny.

I wonder sometimes if the only meaningful respect our men receive are from one another. We need to remember to tell each vet and enlisted person, thank you for our freedom.

When I was young, I used to look through my grandmother's pictures. Most of my uncles, she had many children, had served in the Navy. How did one choose back then, where they would enlist? Does anyone have a clue? I only have one uncle living and I need to remember to ask him this very question.

Thanks for showing this picture Blogger...laying your life down for a friend is often misunderstood.

Anonymous, such vitriol! I have no problem with Guy having prejudice against Islamic extremists who murder innocent women and children, who send young men to blow themselves up killing people who have never done them wrong. I think that anyone who does not have some prejudice against such people to be stupid idiots.

However, your prejudice, or should I say BIGOTRY, is against someone as harmless as Guy because you are so absorbed with hatred and loathing for yourself, your race and your country that you have to lash out at something.

Maybe you should just sit back in front of the fireplace, watch the snow fall and have some eggnog. might mellow you out a might.

I invite you to accept Jesus Christ as your personal saviour. This of course is your own choice, but as a Christian, I beg and plead with you to do so. To not do this is to condemn yourself to eternal damnnation in a lake of fire ten times hotter than the hottest fire known to mortal man. Do you want to face that? What would you do and say as you are continually burning whilst worms and maggots are burrowing through your condemned flesh with no end to it all? Accept Jesus Christ as your personal saviour and avoid eternal damnnation. I would like to extend a personal invitation on this Christmas Eve for you to do just that.

This can be your new lease on life Shylock. No more being angry without reason, no more sorrow at not being a believer, and you will have joy in spreading the word of Christ.

" To not do this is to condemn yourself to eternal damnnation in a lake of fire ten times hotter than the hottest fire known to mortal man. Do you want to face that? What would you do and say as you are continually burning whilst worms and maggots are burrowing through your condemned flesh with no end to it all? Accept Jesus Christ as your personal saviour and avoid eternal damnnation."

Think you have enough fear in the above statement Johnny?

What ever God is, I don't believe he or she would be the monster you describe above. I believe God would be a Jimmy Carter kind of being trying to find the good in all of us.
God would have no ego that needed stroking with praise nor a need for revenge.

"Think you have enough fear in the above statement Johnny?"

No, no fear in that statement, just the words of our saviour Jesus Christ. Believe in Jesus Christ and have YOUR FEAR erased forever. Deny Jesus Christ before man and he will deny you before the father (GOD).

I love guy faulkes' joke. I, too believe in protecting free speech by punching those who exercise it.

It's also funny how God apparently can't multitask. So much for omnipotence!

I have a joke too. So this obnoxious Christian priest at a party got up on a table and told everyone that Allah didn't exist, that the only true god was the god of the Bible. He challenged Allah to knock him down in the next 10 minutes. With only a couple of minutes left, an Iraqi translator came up and shoved him off the table. The translator said, "Allah was busy protecting my translator friends in Iraq." I guess that stupid priest got shown what's what.

I guess it's OK to punch door-to-door missionaries, since they're trying to push their faith on me.