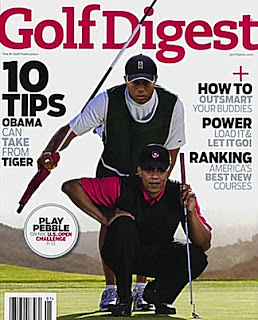 Perfect timing. I'll bet Obama wishes he could take a mulligan on this one.

Posted by Honest Debate at 8:39 AM

Tiger may have given golf tips to Obama, but he looks like he took other kinds of tips from Clinton. Maybe Obama will not take these kind of tips from either of them. Of course when you think about how Obama is screwing up the country, you have to wonder.

It always amazes me on how a huge public figure with an entourage thinks he can get away with affairs.
Especially now, when 95% of the public is armed with a camera, tell all for dollars, and law suits run amuck.

I'll bet Thanksgiving will no longer be celebrated by Tiger.

His 155' yacht is named PRIVACY and should be changed to Monkey Business.

I wonder if any real political damage will be done to Obama, I doubt it. It's still pretty funny in that it shows Obama can't get a break these days. He would not have agreed to do this if he didn't think he was hitchin' a ride on the incredible image of Tiger. That was then. I am curious whose idea it was, Obama's, Tiger's or Golf Digest's. Whomever it was, Obama must have liked the idea.

Another aspect I find interesting is the black columnist like Eugene Robinson and others who seem to be upset that Tiger liked white women. I thought these people wanted a colorblind society.

Newsflash, I disagreed with Rush today. He was quoting one of the mistresses saying that she is not a home-wrecker or any of the other names she's been called. Rush wryly mocked her and asked if she didn't know Tiger was married. I find that insulting. It assumes that men are helpless and under the spell of temptation. No man can resist after all he's just a man. I reject that. Assuming the women had no ties to Tigers wife, I don't believe they did anything wrong. It was Tiger that took the vow. It was Tiger that broke it. He alone is the sleazeball. This seems to be a unique point of view and I don't understand why. I've heard many women in particular that blame the other woman more than the man. Again, after all he's just a man.

I'm very curious to hear from women on this issue.

I think since Tiger Woods was a friend of Obama's, he was set up by the Republicans. A conspiracy by the right wing. Mrs Tiger should just whack him in the head with an ashtray or a lamp, and continue on with her life.
Men are just stupid. She should find another woman to fill in the lost intimacy and use Tiger to get to her next plateau in life. Perhaps she could enter politics.

Obama is dissing the King of Norway. You would think he would want to show off his "bow while shaking hands" and apologize for any collateral damage done by the US during WW2.

You guys know how I feel about Rush...the blame falls on Tiger and his mistresses. He was married and they knew it. It's a shame what a little money and power does to a person. Then again, it's amazing what a camera does to them too.

I watched Sanford this morning found not guilty. Did he not use state money for flying to see his mistress?

We need a moral party for conservatives and I hope it's in the works.

Tiger Woods changed his nickname, from now on he will only answer to his new nickname CHEETAH.