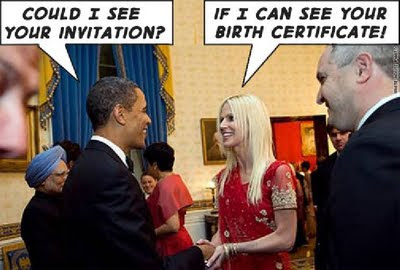 I was thinking someone (myself included) would touch on this in the "Weed Patch" thread. It's a cute little story with major implications. Look at the picture and imagine that the crashers were experts in martial arts, or had anthrax, or grabbed a knife from a table.

Now Obama is throwing the secret service under the bus and claiming executive privilege for the social secretary. Transparency.

"She's lucky it wasn't Bill Clinton."
Sarakein, were you thinking the conversation with Clinton would be "You show me yours and I'll show you mine?"

No, Bill doesn't ask, he grabs. As per Kathleen Willey,
Anita Broderick, and others.

Surely you are not suggesting Bill would be guilty of sexual harassment. Wait a moment, wasn't there something about an intern?