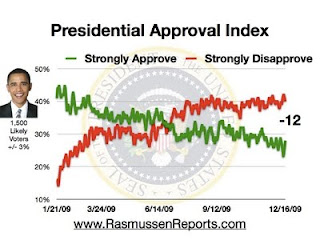 Notice the graph spells the letter X. As in X-President.
Soon I HOPE.

If this were a conservative President, the MSM would be doing extended news coverage and asking the President if he plans on resigning for the good of the country. Now the MSM ignores it.

Recently, Bill O'Reilly interviewed Governor Sarah Palin on his talk show. He asked her if she thought that she was smart enough to be president. Mrs. Palin replied that she was due to her common sense and conservative principles. Here at The Better Living Through Increased Taxation Foundation we believe her answer shows why she is out of touch with the qualifications to be president in the 21st century. On her behalf, we would like to point out that Mr. O'Reilly's question was far too general. Such a question should be broken down into the following specific questions: Are you prepared to lie? Are you prepared to lie repeatedly and often? Are you prepared to forget campaign promises? Are you prepared to blame others for your shortcomings? Are you ready to ignore the pleas of those suffering from your policies? Are you willing to desecrate the Constitution? Can you read a teleprompter? Are you willing to travel around the globe apologizing for America and bowing to foreign dignitaries? Do you feel that reading the bills that you sign into law is a waste of your time? Are you willing to quadruple the national debt? Does your agenda include making as many citizens as possible dependent on big government? If the answer to any of these questions is "No," then you are not fit to lead this nation into bankruptcy, have sex in the Oval Office or send a thrill up Chris Matthews' leg. Go home to the hoi polloi. If you dare voice your opinion in public again, then we will send the news media and Jon Stewart to vilify and ridicule you. You are a homophobe and a racist and what's worse, probably a Christian. Consider yourself lucky that we don't send Michael Moore to make a movie about you. -----This message has been brought to you by the angry white guys at MSNBC.

If you want a first hand account of Obama's fall from grace with the left, visit Watauga Watch. The stalwarts of the left on this blog are now calling Obama Bush2. They are now saying he never proposed a single payer system and was the reason it failed.

Where is liberal socialist sheep POV and Cheerleader (tricycle lard) in all this?