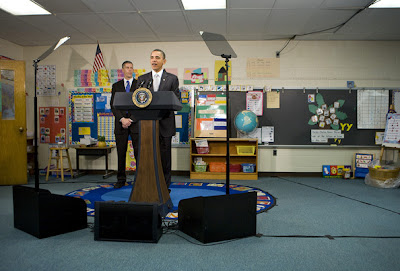 Posted by Honest Debate at 8:10 AM

Even POV does better than this. He, at least, has memorized the talking points.

The teleprompter thing may be why I cannot stand to listen to one of his readings. Knowing every word is read makes it unlike a conversation. I find no sincerity in his readings. It is of no wonder he has given so few press conferences. If off the teleprompter, he starts with all the Uh-ing and stuttering. If he officially has a stutter, fine, if the teleprompter helps him overcome a speech impediment I can see a good reason to use it.
But it ain't workin' for him.

Do you guys think you can get any more petty or Silly?

Children don't behave as petty as you old men.

Find real issue to bitch about not this petty silliness.
HD is this your silly post or is Blogger back?

POV- Obama said himself, that his failures have been because he didn't communicate well and often enough about the socialization of the medical system.
Turns out I may not be the only one not being able to take more than a half-a-minute of his readings.
He certainly gave alot of readings, but there is no such thing as enough if most are not able to listen to him read.

I never believed Obama was a great uniter, as his only experience in life was in uniting like-minded people.
But he can't even do that. This is one of his people cussing at the WH. R-rated for language

I do agree with Ed, Obama has spent far too much political capital on grumpy old farts and special interest that will never agree to any thing.

HD whining about teleprompters is petty and small and makes you look like grumpy old farts. This is like your silly flag pin non issue BS.

POV- As communication is not of importance to you, bully pulpit and all, would the fact that the wimp had you all believing he was for single-payer, and never even introduced it or required it of the congressional bill, bother you at all? The fact that he is so weak that he couldn't even do it smoothly with a majority in both Houses, does that bother you at all?

POV is back to La La La La La... and his talking points (flag pin, single payer, etc.) again. He did this without a teleprompter. I rest my case.

As usual, POV could support nothing he said, but at least he remembers how to say his liberal prayers.

I hope more of the far left agrees with Ed Schultz as does POV. It spells greater doom for the liberal cause to go farther out of the mainstream by openly encouraging voter fraud and videos such as that linked by Sark..

I think the three vocal monitors are a bit much. I'd like to see the processing rack, he's probably got a Crown Macro 2400 powering each, compression and the god like reverb being run by a union sound man. It would make sense if he was Ozzy.

I'm not sure if it was a joke but that's actually a good point about POV memorizing the talking points. The teleprompter tells Obama what to say and by extension tells LiberalPOV and the rest what to say. The teleprompter is a symbol for the talking points being issued for quite some time. Republicans issue talking points too but they need to hold up under scrutiny, not so on the left. The "angry white male" was total fiction, they swallowed it whole. Same thing with racist burning down black churches, or the rich not paying their "fair share".

It was not a joke, HD. I was offering POV a compliment. He remembers how the Kool Aide tastes. Obama cannot remember how to pour it, keep it the same flavor, or to make it. His handlers do that for him.

The proof concerning POV is his mindless return to the same inane statements over and over even though they have been thoroughly debunked. If someone does not tell him what to say, he can say nothing.

As you say, Republicans issue talking points also. They need to be challenged just as much as Democrat points. If these points cannot be defended, then they are invalid no matter which party issues them. Big government policies by Republicans helped cause this mess, though I agree with your previous statement that they were pikers when compared with Obama.

Despite President Obama’s long history of criticizing the Bush administration for “sweetheart deals” with favored contractors, the Obama administration this month awarded a $25 million federal contract for work in Afghanistan to a company owned by a Democratic campaign contributor without entertaining competitive bids, Fox News has learned.

The contract, awarded on Jan. 4 to Checchi & Company Consulting, Inc., a Washington-based firm owned by economist and Democratic donor Vincent V. Checchi, will pay the firm $24,673,427 to provide “rule of law stabilization services” in war-torn Afghanistan.

A synopsis of the contract published on the USAID Web site says Checchi & Company will “train the next generation of legal professionals” throughout the Afghan provinces and thereby “develop the capacity of Afghanistan’s justice system to be accessible, reliable, and fair.”

The legality of the arrangement as a “sole source,” or no-bid, contract was made possible by virtue of a waiver signed by the USAID administrator. “They cancelled the open bid on this when they came to power earlier this year,” a source familiar with the federal contracting process told Fox News.

“That’s kind of weird,” said another source, who has worked on “rule of law” issues in both Afghanistan and Iraq, about the no-bid contract to Checchi & Company. “There’s lots of companies and non-governmental organizations that do this sort of work.“

Let’s see the White House spin their way out of this one.

I'm not so much worried about the teleprompter, other than it shows he cannot think on his feet and is tightly controlled in what he says.

I'm more concerned about George Soros having his hand up Obama's rectum and using him as a sock puppet to destroy America.

Good point Wolf, very true. A teleprompter for a speech to sixth graders is funny though.

Obama is delusional.
This is a Video of Obama throwing Congress and reality under the bus.

In the above video there is no teleprompter.