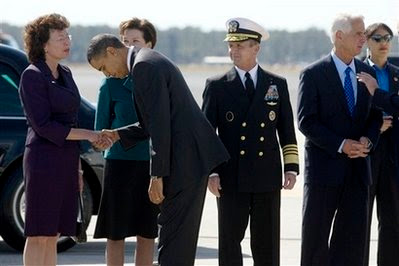 THE MAYOR OF TAMPA
Posted by Blogger at 12:55 PM

One more silly post.
Don't forget such images as this can be easily photoshoped. Is this an unalterd image?

Honest Debate could you have posted a dishonest image?

I give you the image is unnaltered, but is it important?


Hard to believe if it's not?
I wonder what the Flag Officer standing there was thinking.

Forget the Flag Officer, Sark. Do you wonder if the Mayor of Tampa was thinking "God! Another Clinton! My face is up here, Jerk!"? :-)

I was wondering if he thinks he's really of asian descent.

Much of his early childhood was in an Asian culture.

His religion doesn't allow him to gaze upon a woman without a hijab. The picture caught the results as Obama was trying to hide his excitement.

Thanks for posting this.

I have a brother that lives in Tampa. I called and congratulated him for his mayor's promotion to queen.

I saw a video of this and it really does look more innocent in real time, but still...