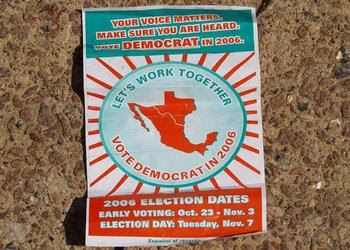 Absolut Vodka had an advertisement campaign in Mexico showing the way the map should look.
I will never allow Absolut Vodka through my lips again, and Absolut is a great vodka.

Texas can be ruled out for ever for the Democrats, this map will be used against them over and over.

Well, it is at least the start of the left in telling the truth about their methodology concerning illegal aliens. They need to add some more states to the map to show the entire picture as per Sark's link.

The Royal Australian and New Zealand Collage of Psychiatrists' Congress at SkyCity Convention Centre in Auckland brings together mental health experts in a diverse range of areas; from children and adolescents to old age, mental health across the lifespan will be discussed. Here are some highlights from this morning's program.

A recent study has found that global warming has impacted the nature of symptoms experienced by obsessive compulsive disorder patients. Climate change related obsessions and/or compulsions were identified in 28% of patients presenting with obsessive compulsive disorder. Their obsessions included leaving taps on and wasting water, leaving lights on and wasting electricity, pets dying of thirst, leaving the stove on and wasting gas as well as obsessions that global warming had contributed to house floors cracking, pipes leaking, roof problems and white ants eating the house. Compulsions in response to these obsessions included the checking of taps, light switches, pet water bowls and house structures. "Media coverage about the possible catastrophic consequences to our planet concerning global warming is extensive and potentially anxiety provoking. We found that many obsessive compulsive disorder patients were concerned about reducing their global footprint," said study author Dr Mairwen Jones. (9am)///

Michael Savage had it right, "Liberalism is a Mental Disorder."