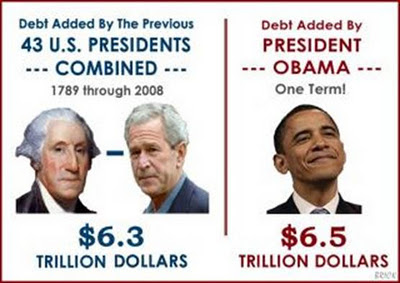 Actually, he's only been in office for 3/4th of a term!

You have to put some of the blame on the Dem controlled senate as well...they have refused to pass a budget! Refused to take up numerous bills sent to them by the House which would cut expenses, and have demagogued the issue insisting that it's ok to borrow 40% of the money we spend every month because, after all, we could just raise taxes on "rich" people.

By "rich people" he apparently means everyone except the almost half of Americans who don't pay ANY income tax. Some of these people who don't pay tax but who actually get a tax "credit" from the government (welfare) are, in fact, illegal aliens.

Hello everyone. I've been on haitus for quite a while now. The reason I quit posting is due to two reasons. The first is because Liberal Socialist Sheep POVs are gone. Although I'm glad they are banished, it was still great sport to pound away at those idiots. Second is because I was sick of politicians and politics to the point I needed a break. I spent more time getting in shape at the Wellness Center and Cone Lake and I feel great now. I am still not that interested in going full bore back into political discussions, I wanted to say hi.

We are headed down the slippery slope into oblivion. What is most alarming to me is that I hear no outcry from the supposed "silent majority" on topics such as illegal aliens, gun control, foreign aid, anti-Israel, anti-Tebow rants, big government and gas prices.

If folks aren't screaming, by now, then why would they give a hoot if the President spends another trillion? Apathy has taken hold of our once great nation.

The only ones I see actually accomplishing anything are fringe left liberals. Look at the things they are ramming down our throats without so much as a wimper from the appropriately named silent majority. The Republitards had 8 years of near total control in Congress and Presidency and we got NOTHING from it except more big govt (Patriot Act).

We've turned the corner in America. I see us as socialist, never to return to Capitalism or a limited government that served us well for so long.

And now we have this guy - RINO Romney. Is this all the Republitards can give us? He's as bad as Hussein Obama - health care, anti-gun, and certainly big government.

I'll be voting for Ron Paul or Bachman or Cain in the election regardless if they are on the ticket or not.

PS I would entertain any attempts to best my brilliance be any liberal socialist sheep who are stupid enough to try (povs, williamson, biker bard, shyster, etc)

Oh, and isn't Tim Tebow just great. What a handsome, nice guy. That is the type of dude I'm looking for - a Christian who has values and is a role model to young America. Haven't been much into football in years, but I'll be rooting for Tebow today against the Patriots. Go Tebow. Your a Christian inspiration to many of us; a bright spot in a damned world, an example of what it means to give of yourself.

Johnny, good to see you back. You were missed. About not having the POV to kick around. Actually I thought you were one of those, because of his improper blogging behavior, who was asking us to let him go. Are you now saying you only enjoy the sport when you are shooting fish in a barrel?

I was being a bit coy with my commnet about the POVs. You did exactly the right thing with them - it got to the point they simply posted mindless babble like a broken record. They needed a little of their own medicine as Williamson blocks all posts that disagree with the liberal socialist mantra.

Good to see you and the other regular posters are doing well in this New Year. Although I have little good to say about what the future holds for us, perhaps I am dead wrong - I hope so. The liberals are like a malignant cancer - they grow and spread. Glad there is a site like this to combat their idiocy.

The dems are spending like a crack whore with a stolen credit card.

It will collapse the country if continued.

Unfortunately, I don't see the republicans doing mu to stop spending either.