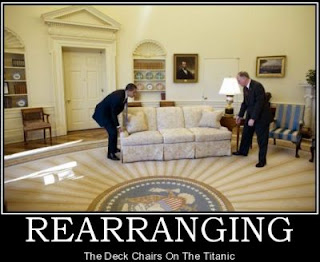 Newt empathizing with poor Boehner last night: "President Obama's class warfare, his commitment to raising taxes, increasing regulation and his failed ideology make his vision for America one of the most radical in our history. The vision he describes is for fundamentally changing our country.
I sure wouldn't want to sit behind him as he described that"

"Barack Obama’s State of the Union is all about letting you know that government is going to do everything for you and when it can’t keep its promises, it will take from the successful and give to you." Red State and I add "or borrow it from our enemies."

Fact checking Obama claimed Bush signed into being more regulatons than he. What he did was throw the minor ones in the pile. Heritage reports: Using "major rules – those with $100 million or more in economic impact, a very different picture emerges. Some 189 of these costly rules have been adopted in the past three years, compared to 153 during George Bush’s first three years. That’s a 23 percent increase in red tape. So much for regulatory restraint."

More Fact tracking from the Left

"A national poll indicates that this was the least-watched major speech of Obama's presidency, and an informal poll by the Watauga Democrat shows that result mirrored in the High County." From Watauga Democrat