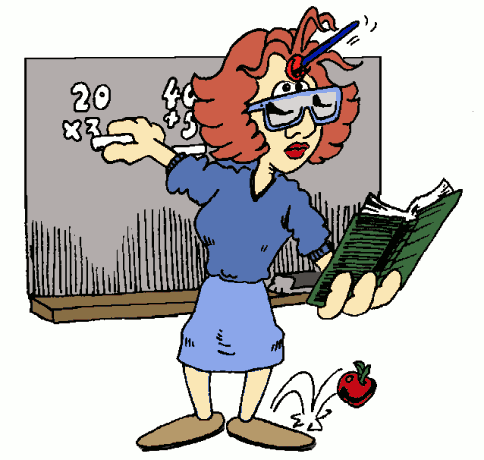 It's always a controversial topic, but recent events in the NC State legislature have brought it to the surface once again.

Like probably the majority of conservatives, I am a fan  of GOOD teachers - of which there are many. I don't necessarily agree that they are, as a group, underpaid. Nor do I think they should have near immunity from being fired for anything short of criminal offenses! But, I do think that they are, as a group, a hard working and dedicated bunch who deserve respect and support for their willingness to do an increasingly more difficult job.

In North Carolina the teachers "union" is, in fact, a lobbying organization. They aren't engaged in what we would normally call "collective bargaining", but instead, they are engaged in political lobbying as their tool of choice for advancing their interests. As a lobbying group, they are a tremendous influence in state and local elections - almost always supporting the Democrat candidates. At the local level it is usually all but impossible to get elected to a seat on the school board over the opposition of the teachers union! Thus, we essentially have a situation where the teachers influence the selection of school board members and NCEA lobbying efforts oppose any political figure who doesn't support increasing school funding, teacher salaries and benefits, etc. Again, they don't function so much as a union as they do a political lobby.

Among the legislation passed this year by the state legislature was a bill to eliminate dues witholding for the NCEA. The argument is that, as a lobbying organization, the NCEA should not be funded (nor subsidized) by taxpayers - that the collection of dues by the state and the remittance of those dues to the NCEA is, in fact, utilizing state resources to underwrite part of the costs of a political lobby!

Governor Perdue vetoed this legislation but, in a special session this week, the NC House overrode her veto (which had been overturned by the Senate earlier this year) and the NCEA will no longer have their dues withheld by the state for them, but must collect them on their own. This will place a financial burden on the NCEA and part of me is pleased at any diminishing of their power.

I have, however,  mixed feelings about this. I could accept the argument that it's subsidizing a political lobby, IF it weren't for the fact that other state employee organizations who are also lobbying for their members, didn't have their dues withholding eliminated! No, it seems to me that this is entirely focused against the teachers unions as payback for their vociferous support of liberal Democrats and, as much as I disagree with most of what the NCEA stands for, I have come to the conclusion that penalizing that organization in this manner is petty, purely political and not worthy of this Republican legislature! I would feel differently if all the state organizations were treated the same way - but the singling out of this one group doesn't seem quite fair to me.

So, you "disagree with most of what the NCEA (sic) stands for..." Would you mind elaborating on which aspects of their platform you do or do not support? Just curious!
http://www.ncae.org/Images/Users/2/resolutions11.pdf

Teach! Great to see you again. Welcome back! Hope you will stay and continue to give your valuable insight into the issues of the day!

I'm a little surprised that, in a post where I thought I would get flamed for suggesting the Repubs were out of line with their recent overide of the veto - I get instead, a question about my non-support of the teachers union. (NCAE, yes! Thank you for that correction. It's a mistake I frequently make - probably because of their affiliation with the NEA. I will try to be more careful in the future.)

As to where I disagree with them, I would have to say that, in general, I am opposed to their political activity on behalf of Democrats. They are as you know, a major political force in support of liberal causes; Approximately 95% of their substantial political contributions go to Democrat candidates.

In recent times, this country has faced serious economic issues. We can't pay our bills without borrowing about 40% of the money we spend. Americans are dealing with high unemployment, tighter budgets and making financial sacrifices just to stay in their homes and feed their families. In 2010 we elected a conservative slate of candidates at the National, State and County levels. I believe our expectation was that those we elected would cut back our runaway spending and bring costs under control.

Which, they basically did! Yet, every step of the way they were opposed by the teachers unions. When the NC legislature balanced the state budget WITHOUT RAISING TAXES, the NCAE picketed the capital demanding that they not be impacted! When our county commissioners addressed the difficult budget, the local NCAE and their members flooded the courthouse with speakers demanding that sales taxes be raised rather than any cuts made in THEIR budget. I also opposed their exploitation of the numerous young children they coached and brought to the BOC meeting to lobby for their desired budget!

I am also strongly opposed to tenure for public school teachers - a major issue with the Union. We talk about the high quality of our schoolteachers but, apparently anyone who gets hired must be, at the very least, "acceptable" since hardly any of them ever get fired - and probably next to none for performance reasons. In NC Private schools, nearly 10% of the teachers that are hired, do not make the grade. In the public system, it is less than 1/2 of one %! (EVEN LESS among probationary teachers - suggesting that the requirements can't be too stringent since everyone seems to meet them).

I may be wrong, but as I recall in previous discussions with you, you expressed some agreement that poor teachers were protected within our school system).

I can add to my list the Union's opposition to home schooling, to Charter Schools and to any subsidies to parents who place their kids in private schools. These arguments are certainly not made in support of the education of these children, but are entirely focused on job security for public sector teachers and, by extension, the union which taxes them for it's very existence.


Anyway, thanks for your comments, We hope you will continue to contribute here. I would particularly like to hear your views on my intended topic here - the veto override which eliminates dues withholding on behalf of the NCAE.

I am opposed to the NCEA because, in my opinion, they are more concerned with promoting their personal well being than they are with teaching. Their support of tenure protecting bad teachers is an example of this.

Would you mind elaborating on which aspects of their platform you do or do not support?

ToT, this is pretty simple.

Any trade organization has the interests of the members at heart, not the clients of the employer; in this case kids.

NewGuy -
Thanks for the response.
I'm with you 100% on your view of the veto override. I get a bit tired of legislators insulting our intelligence with their explanations of why things happen a certain way, though. I found Tillis's unctuous explanation to be particularly grating. I'd have (slightly) more respect for him if he would just admit that, yes, he was retaliating for NCAE's past actions.
I also would like for someone to explain how withholding dues really costs the taxpayers money. Maybe I'm missing something, but it seems like the amount would be nominal. I don't have any experience in that area, though, so perhaps someone else can enlighten me.
Overall, though, I don't think the issue of withholding dues is a big deal. Unless, of course, you are employed by NCAE, because there will obviously be the potential of significantly-reduced membership and revenues. Much more objectionable than the outcome was the process and the lack of integrity displayed by Tillis as he shrugged and denied there was any singling out involved. If the same result had occurred as a result of typical, transparent law-making, I would shrug my shoulders at the whole thing. I'm considering chunking my hard-earned paycheck into NCAE dues for the first time in my many years of teaching, though, because of the way the whole thing was handled.
I am not a member of NCAE, but I do benefit from much of what the organization has accomplished. I hear people say all the time that NCAE works for teachers, not children. Of course it does - it's an association of educators. I have strong views on many education-related issues - I agree with NCAE's stance on some and disagree on others. Ultimately, though, I think that 80-90% of what they support and fight for does benefit NC students.
I am all for fiscal responsibility on the part of our government. But with the HUGE cuts that education has faced at the state level over the past few years, it is frightening to think how much worse it could have been if there weren't a "teachers' union" involved in the process. Education is a huge percentage of the state's budget, so of course it is not going to be exempt from the economic woes, and no one is expecting that it would be. But state legislators, who frankly know little to nothing about the needs & challenges faced by public school teachers & students, are making these decisions that directly affect the daily lives of students and teachers across the state.
Unfortunately the attitudes I have seen lately towards education and educators in this state have not reassured me at all that we can trust lawmakers to make the best decisions for schools, kids, and teachers in NC.