Remember When We Used To Blame The President For Gas Prices? 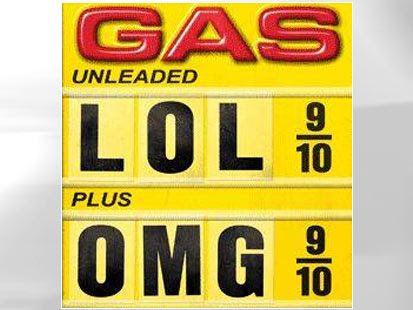 Oh yeah....that was during the BUSH administration. When gas prices peaked in the summer of '08, Democrats like Nancy Pelosi quickly determined that it was because of then president G.W. Bush. Of course the media piled on and gas prices were the headlines for most of that summer. Prices soon went back to more 'normal' levels - Dems moved on to more productive political pastures and the mainstream media fell in love with candidate Barack Obama! Hope and Change!

It would seem that, since gas prices were considered to be the fault of Bush when they were going up, then he would have to receive some serious credit when they went back down. It would also seem that today's gas prices, once again at their highest ever levels, should be attributed to the president as it was in 08. For the most part however, current news articles about today's gas prices don't seem to make any connection to the Obama presidency!

I was Googling around some of the 2008 news stories about gasoline and Bush. I found an interesting article in the Washington Times which was published during the transistion from Bush to Obama. (The article is here)

An excerpt: "A once-popular bumper sticker says simply, “When Bush took office, gas was $1.46.” It was meant to be a slam, but as the end of his eight years approaches, President Bush is seeing gas prices that, adjusted for inflation, are lower than when he was inaugurated.
Last week’s $1.59 - the average for a gallon of regular on Dec. 29, according to the Energy Information Administration - works out to $1.33 in 2001 dollars, or 9 percent less than it was the day Mr. Bush took office...."

We are expecting to pay over $4.00 a gallon in the next few months. Almost 3 times what gasoline cost when Obama took office. Where are the networks connecting these prices to Obama?

Every network is leading with stores about gasoline prices. When Bush was president, gas prices were his fault. Why aren't the current price increases blamed on Obama?

The news coverage was so biased on gas prices, it held over and hurt McCain in his campaign. High prices then were strictly caused by Republicans... according to the MSM. I can't think of a more obvious example of Leftist bias in the MSM.

"For the most part however, current news articles about today's gas prices don't seem to make any connection to the Obama presidency!"

AND this President's policies are contributing MORE to the higher prices than anything Bush did. Bush's gas spike can be directly attributed to Hurricane Katrina and the shutting down of gulf coast refineries. Middle East tension (as we lead from behind), strict regulations on offshore drilling following the Deep Sea Horizon disaster and the Keystone Pipeline decision are all having an impact on oil production and the current spike, which many people believe is only just beginning... I would love to see ONE mainstream news agency talk about this and the higher prices on everything else that results (everything gets moved in trucks, trains and ships).

Nobody- Even then, during the Bush gas price increase, President Bush was pushing for ANWR and the Democrats were fighting against it.

Good points, Nobody. And, when you look at the billion in tax dollars his DOE has blown on loans to Obama supporters involved in alternate energy, you have to wonder if his policies which are putting upward pressures on oil prices are not intended to help these same contributors.

We cannot afford 4 more years of this man and his czars!

PS...Good to see you posting!

The rise in gas prices is more oil company politics. Had it been an extremely cold winter, they would've blamed it on a shortage of oil. With a record warm winter, they are looking to other things to blame. They ALWAYS have a reason to raise oil prices.

The problem with all this is the consumer seems to believe it! Obama will get none of the blame, and the consumer will grumble a bit while pumping $5.00 dollar a gallon gas. The end result will be an acceptance of $5.00 a gallon gas by an easily snowed consumer.

If Hussein Obama isn't getting heat thus far in his administration, someone tell me exactly what it will take? I'm at a loss here folks. I don't think $10.00 a gallon gas would do it.

Higher fuel prices are exactly what the President and the left want. That's why the Marxist Media is saying nothing about it.

They believe it will force people to "green energy" alternatives, and the higher profits of the oil companies will fuel Obama's wealth re-distribution program.

Hold on, it will be a bumpy ride.

The Department of Energy (created by Carter to rid our dependency on OPEC oil) became a tax collection agency for the "Windfall Profits Tax". Here we go again.
Carter II.

And of course the DOE's mission now will be to keep us off Gulf of Mexico and Canadian oil.

“Of course… you know that. He has said it himself. Chu, his energy secretary, said in 2008 he wanted gasoline prices to get to the European level, which is $9 or $10 a gallon. Last year, the president said people shouldn’t complain about high gas prices — they ought to buy more efficient cars,” said Gingrich. “The president himself said he wants to get there, he just wants it to be gradual. His policy has been outrageously anti-American"

Newt's comment... all fact, yet no outrage from the country. The MSM pulls the strings on public opinion.

Newt should go all out. Call a spade a spade. He should publicly accuse Obama of purposefully undermining the country. He should talk about Obama's worship of Sol Alinsky. Call him the enemy of America. Beat the media so bad with it that it has to be heard. This would be either Newt's swan song or his winning of the primaries.

Newt Gingrich doubled down on his weekend claim that defeating President Obama is a matter of national security, ripping the president for what he described as policies of appeasement.


On Monday, Gingrich said Obama was “the most dangerous president in modern American history,” and that defeating him in the 2012 election was “a duty of national security.”

Keep it up Newt!

Remember, inflation hasn't hit yet. No way they will keep inflation from becoming a factor - especially if the economy does actually improve. The rising cost of food and goods as an offshoot of failing to take advantage of our own natural resources will start to have an effect. What will result from this is the million dollar question.

Will Americans start buying mini coopers? Or will they vote someone in who will drill for more oil? Whichever is the path of least resistance is my guess.

No one, especially John Boehner is raising hell. Those RINOs in DC are as bad as the liberal socialist sheep president (notice lower case).

Johnny Rico- When inflation hits (becomes noticed) it will be everybody's fault except Obama's. It will be Bush's fault, Boehner's fault, the Sunami's fault, the weather's fault, global climate change warming's fault...

The most grotesque political deceit ever: "It is the Republican's fault that the Keystone Pipeline was declined by Obama". This President would blame someone else if he crapped his own pants.

Santorum may actually make him do it. Sark.

Inflation will come, and when it does it will be devastating.

Of course, even now, we are experiencing great inflation in food and fuel prices, but of course the gov't doesn't use that in their inflation calculations, but they do use the collapsed housing prices.

More than doubled in 3 years. What did your IRAs, 401ks and savings accounts do during that time?

If drilling won't make oil come down in price then how will alternative energy fueled cars be any cheaper? The same excuses used for high gas prices will apply to electric cars as well. America is being fooled into thinking they will have free transportation at some point, but you and I (not liberal socialist sheep pov, Mike D, JW, or an of the other idiots)know this won't be the case. What a bunch of dimwits the liberal socialist sheep are. Guess that's why we call them sheep.