What Happens In Vegas - With YOUR tax dollars. 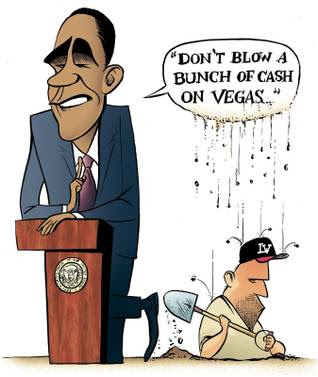 Apparently what happens in Vegas doesn't ALWAYS stay in Vegas....

Do you remember when Obama said: " “you can’t go take a trip to Las Vegas or go down to the Super Bowl on the taxpayer’s dime.”

When Obama said: "You don’t go buying a boat when you can barely pay your mortgage.....You don’t blow a bunch of cash on Vegas when you’re trying to save for college. You prioritize. You make tough choices. And it’s time your government did the same.”


HINT: It wasn't in any recent speech about the GSA spending your taxpayer dollars in Vegas....No, the first quote is from 3 years agowhen he was demonizing the banks, some of whom were recipients of "bail out" money....The second quote is from a 2010 New Hampshire town hall meeting ....Apparently however, what's good for the public goose, isn't good enough for the government gander!

Billions of Federal dollars to be spent on a high speed railway in Nevada....payback for Senator Harry Reid's support? ...and now, the recent scandal with the General Service Administration acting like Vegas High Rollers on the government money?

From the NY DAILY NEWS:
"
Some people think the government can't get it right even when it's doing wrong.
Take, for example, a group of federal employees encouraged to go "over the top" on a five-day conference in 2010 in Las Vegas. They blew $823,000 — in part on commemorative coins, $44 breakfasts, shrimp dinners and matching vests.

If the GSA is waisting money like that then it should be obvious to everyone the system has broken down and collapse is inevitable. You can't fix this. This is a mindset and now a way of life.

Sark...the system, if it hasn't broken down, seems to be well on its way.

In Obama's speech the other day, I heard him say that we wouldn't "provide tax cuts for people that don't need them".

Think about that a minute. Apparently your "need" for the money you earn is to be determined by your government and, if they determine you don't "need" it....well, it's pretty obvious

I just found this a strange way to establish tax policy. Remember when we used to tax based on what the government needed? Now the idea seems to be it's ALL government money except we will let you keep what we think you "need".

In my estimation, we could cut 50% of federal agencies and not notice a thing. The ATF did something far more sinister than GSA - they contributed heavily to the killing of a federal agent and then lied about it (with help from Attorney General Eric Holder). Will anything come of the Fast and Furious Scandal? Seems unlikely given that Holder and the ATF are actively thumbing their noses at the House investigation. Nothing from the Senate. Like Solyndra, it will vanish with little splash.

8X more people have renounced their citizenship or turned in their Green Cards since Obama took office.