Reid and Pelosi Urging Obama to say "Screw the Constitution" 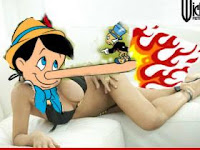 Regarding the debt ceiling, Reid and Pelosi are demanding Obama just ignore the Constitution and raise the ceiling unilaterally himself.   A must read editorial Rivkin and Casey "The Myth of Government Default"  explains why Obama is not allowed to do that.

The writers say that “three false arguments, pushed hard by the Obama administration. . . must be laid to rest if the American people are to understand the issues at stake in the federal ‘debt ceiling’ debate.”


The first is that it is not true that a failure to raise the debt ceiling will cause a default on the national debt.  The writers explain: Section 4 of the 14th Amendment makes it impossible for us not to pay our debts.  And, “roughly $200 billion in tax revenue per month is more than sufficient to service existing debts.  If the executive chose to act irresponsibly and unconstitutionally and failed to make any debt payments when they come due, debt-holders would be able to go to the Court of Federal Claims and promptly obtain a money judgement.”

Second, Federal programs, including entitlements, are not considered “debts” falling under the 14th Amendment.  Therefore, besides the tax receipts coming in to pay our debt-holders, there are many  programs that can be tapped.  Credit agencies “have traditionally acted favorably when heavily indebted countries have not defaulted on their debt but cut deeply their public spending.”

Finally, using the 14th Amendment to unilaterally  raise the debt ceiling as proposed by Pelosi is manifestly incorrect and constitutionally dangerous.  The Amendment grants Congress “the power to enforce, by appropriate legislation the provisions of this article.”  And “nowhere in the Constitution is the president authorized to borrow or spend money without congressional action, except insofar Congress itself may permit.”

Americans need to know these things and to wake up.  As Sherlock Holmes says: “The game is afoot.”

Urging he needs not.

We have a president who does not believe in the constitution, the separation of powers or the concept of a free society. A man who directly refuses to enforce immigration laws; whose justice department will not defend challenges to the DOMA passed by congress and signed into law by a previous DEMOCRAT president and who will use the full force of the justice department to harass political enemies but will do nothing to stop voter intimidation if it is directed against Caucasions.

Why would he be concerned about following the constitution here?

The question is whether he can be impeached for violating his oath toe protect and defend the Constitution. Could he be removed from office for this?

The House might impeach him but the Senate would acquit him on every issue but possibly gun control as that one would cost many fo them their seats.

The Supreme Court could overrule his unconstitutional actions, but will they?


Kim Jung Un had NO military experience whatsoever before Daddy made him a four-star general. This snot-nosed twerp had never accomplished anything in his life that would even come close to military

leadership. He hadn't even so much as led a Cub
Scout troop, coached a sports team, or commanded a military platoon. So he is made the "Beloved Leader" of North Korea. Terrific!

Oh crap! I'm sorry. I just remembered that we did the same thing. We took an arrogant community organizer, who had never
worn a uniform, and made him Commander-in-Chief. A guy, who had never had a real job, worked on a budget, or led anything more than an ACORN demonstration, and we made him President of the United States - - - -

TWICE !!! I'm sorry I brought this up. Never mind.

... and we made him President of the United States twice.

66% of the Colonists somewhat approved of King George.

No No No, he's the wrong man to bring up impeachment, so even though I believe Obama should be impeached, I won't be able to support it because the wrong man is behind the impeachment. That Rep could never get it all the way through the House and Senate, he's just not the man... so I won't support it.

The Senate is controlled by the Democrats who would not find him guilty of anything no matter what he did or what proof existed or what the offense was. He could molest the interns in the white house, rape a few civilians, lie under oath in a court of law, steal furniture and other items from the white house to take to his personal residence and be a featured item on "DATELINE" - they still wouldn't convict him.

I am sorry to say this but, I don't believe our constitution is the solution to a problem when you are dealing with people who are not of good faith and who put their partisan politics before the good of the nation.

Maybe...years after it's all over, the Supreme Court will overturn some of the damage he has caused...and is still causing. But, you can't count on that either given that at least 3 of them are activists with the same agenda he has.

New Guy, maybe Williams has the correct perspective. God help us all.

Guy, I do believe Williams is right. We lose the debate when we allow it to become an issue about our "right to hunt". When gun control advocates suggest that hunters don't need high capacity magazines - or semi automatic rifles, etc....and we debate that as if it were an issue, we lose.

Remember the Watts riots? The Detroit riots? The Liberty City (Miami) problems? Marauding gangs threatening averything and everyone in their path? Civilians dragged from the vehicles and beaten?
When one of those gangs is attempting to invade your home - ask yourself if a 30 round magazine on a semi automatic rifle is a good thing for you to have?

It seems to me that Americans have the right to possess their weapons for self defense, hunting, sport or just because they like to collect things. The constitution doesn't distinguish ....it just says "
" The right of the people to keep and bear arms shall not be infringed."

Doesn't seem that complicated to me.

I agree the Second Amendment is for the propose of protecting us from a tyrannical government, even our own if it goes bad. What scares me is the possibility we might have to use it for that purpose.

Most of the Founders felt we would.