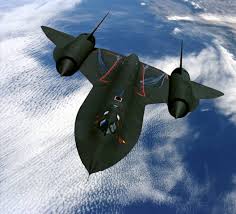 For Vent Page 71 we pay homage to the Lockheed SR-71 BLACKBIRD...First design was the A-12, which was designed to overcome the flaws of the slow flying U-2 spyplane.

. Building on the A-12 concepts, Lockheed developed the SR 71! Nicknamed BLACKBIRD this long range reconnaissance aircraft was used from it's initial delivery in January of 1966 until it's retirement in 1998, only 32 were ever delivered.

Capable of sustained flights above 85,000 feet and top speed of around 2193 MPH, the BLACKBIRD was designed to avoid the fate of the slow flying U2 which had been shot down over Soviet Territory and it's pilot Gary Powers captured. The Blackbird could high and fast; fast enough to outrun missiles!

Not capable of the Mach 3 speed of the SR 71, nor actually even capable of achieving the Mach 1 it was named after, my choice nonetheless, for iyr Automobile Icon for Vent Page 71 is this 1971 Mach 1 Ford Mustang.

Not the first of the Mach 1's, but the one I remember most. I fell in love with the twin to the pictured car when I walked into the Ford Showroom while my 68 was in for service....I have often regretted my decision not to trade at that time - I've never owned a Mach 1 and I still regret not buying this one!

The administration's hate for the Second Amendment has lead to a major violation of the First. The specs for a working gun constructed by the 3D printing method have been removed from the internet by orders of the government. Unfortunately for these tyrants, 100,000 people had already downloaded it.

This is a disturbing precedent as one can get the specs for any gun from the patent office or other sources and with a small machine shop construct it. Are gun smithing manuals soon to be things of the past?

This is another example of the powers that be trying to use the Constitution for toilet paper.

Of course Watauga Watch “challenges Miller’s eligibility.” The Williamsons live to challenging (a more accurate description would be attack) Christians, Conservatives, Economics, Property Rights, and just about everything else not in keeping with their Socialist ideals.

Other “challenges“ from Watauga Watch include:

“April is Pharisees Month” – An attack on Billy and Franklin Graham

“The Party of State-Mandated Vaginal Probing Goes Limp” – A “challenge” against prolife legislation.


And these are just a few of the taglines. The actual content is far worse (reader discretion is advised.)

In the future, the Democrat may want to consider their sources prior to publication.

On the bright side, comments about the article from the public are overwhelmingly in support of Miller. That Chris Matthews’ “tingle up my leg” feeling JW felt when seeing his blog on the front page of a disappearing newspaper was short-lived. That sensation must have by now turned into pee running down his leg, as he and his wife realize they have lost their hold on Watauga County.

This is what passes for journalism in Watauga County! The Democrat is no worse than the HCPress who couldn't be bothered to send a reporter to the county Republican convention but nonetheless provided extensive (and inaccurate) coverage of the event obviously based on the grumblings of 3 or 4 Republican rejects!

Posted on Liberal blog but reposted here in case it's cut from there.

Thank you NATHAN MILLER for your service to ALL the citizens of this county and for you understanding that it is NOT YOUR MONEY that you are handling.

Taxpayers who want to donate to these non profits may do so at their pleasure. We don't need the county deciding which charities they want to support with OUR moneyl.

How much have Welch and Kennedy given of their OWN money?

Watauga Watch no longer allows debate of any kind. Comments that differ from JW's Socialist worldview are blocked from publication.

It is wise of you to repost here - I often have to do the same thing.

I bet Jay Carney wishes he could block facts, criticism, and questions as easily as JW.

But Watauga Watch is his blog - the decision to kill the site's relevance is his to make.

Nevertheless, I continue to post there. He has to read the comments before he can decide to block them. From time to time, I like to remind him of his lies (most recently, his lie that Nate DiCola is a Republican.)

THE NEW MICHAEL JACKSON, rather than backing up to the big porch behind him, or going inside, orders a US Marine to violate his uniform regulations.

President George W Bush didn't need to call in the Marines to protect his hairdo.

Sark, I watched this on TV and felt it was very uncomfortable and very disrepectful to the Marines - not just those involved, but all of us.

Of course Obama would not have any sense of what is right or wrong when it comes to the military.

NewGuy- If you Bing 'Obama umbrella' you will see he often thinks of people as his load-bearers.

Same with Hillary. She thought, as First Lady, the Secret Service agents should have to carry her briefcase for her.

Typical lack of respect for the individual.

"If you want to remain on this detail, get your f**king ass over here and grab those bags!"
(From the book "The First Partner" p. 259 - Hillary to a Secret Service Agent who was reluctant to carry her luggage because he wanted to keep his hands free in case of an incident.)

From what I understand from talking with a few people this week, the DSS board should not be dismantled. Anyone have a reason that the commissioners would consider this move? As I understand it, anyone in office...dem or repub could boot whomever they please for political purposes. This is a bad decision to me as I know many people who work there and have worked there over the last 40 years.

It seems to me that the primary function of the local board is to select a director. Since this is, at it's basic level, a county agency, why should the county manager not be the person who hires the director?

To me, the board is just another layer of unnecessary bureaucracy. Of course they will organize their opposition to the elimination of their board; and, the current director is naturally quite comfortable with the current arrangement. I expect they will recruit as many people as they can to attend Tuesday's public hearing and advocate in favor of them keeping their bureaucracy in it's present form. That doesn't mean that it's best for the taxpayers - or for the clients of DSS.

I still have an open mind on this and would like to hear arguments from both sides. But, the threat that future commissioners "might" replace a Director of Social Services doesn't carry much weight with me. These commissioners are accountable to the voters - the present board members are not.

Republican-controlled Ashe Board of Commissioners voted to keep their board in place and I agree with them. This is an agency that needs to stay out of the political winds.