The 74 CI Harley! The engine that Harley first introduced in 1922 as the "f" Head and which  became the standard "big twin" for most of the rest of the century. The Flathead version was introduced in 1930 followed by the Knucklehead, the Panhead and the Shovelhead kept this engine as the "Big Harley" until displacement was increased to 80 inches in the late 70s.

We love the sound of this old Harley - reminds us of the grumbling that we frequently see on the Vent Pages!

1974 was not a great year for car nuts! The Arab Oil Embargo, gas lines, government mandates all combined to take the excitement out of American cars. Imagine the highest HP you could get in a Corvette was 270 HP and the standard Corvette engine was a puny 195! 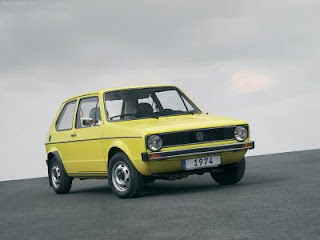 This, after all, was the year that the Mustang II, available with either a 4 cyl or a v-6 was Motor Trend's Car of the Year.....Most will also remember the ridiculous 55mph NATIONAL speed limits  imposed on American drivers!

It's hard to pick an auto icon for 74....Probably the most significant in terms of pointing the way to our new directions, was the 1974 VW Rabbit! (sold in Europe as the "Golf"!

No front brake, hand off the handlebar to shift gears, foot off the ground to push clutch...

Folks! This (along with the AP scandal) should be a big deal! We should be pissed off! There is a good chance that the Obama administration is using its control of the executive branch to harass/intimidate conservative groups, suppressing their ability to freely participate in the electoral process. If these groups were being denied the same tax exempt status that liberal groups have, then conservative groups are less able to participate in the political process. If conservative groups are being harassed with extensive questionaires and audits between 2010 and 2012, they are less able to participate in the political process. This reeks of totalatarianism -- every totalitarian from Hitler to Mussolini to Stalin have used the power of government to limit political opposition. Add to this the AP scandal and you really have the appearance of totalatarianism (which also suppresses/ intimidates the free press -- not really necessary, since the media has been in bed with Obama since 2007). If this had happened in 2004 and liberal groups had been targeted, you better believe the press and liberals would be UP IN ARMS, demanding special prosecuters, Congressional hearings and impeachment. What are we doing??? Nothing. Apathy. And liberals -- don't think I'm being overly dramatic. If nothing happens here, and a Republican wins in 2016, then Republicans MUST be allowed to practice these same actions, only YOU'LL be the target then. And you won't be able to complain one little bit because you're keeping your mouths shut now.

Republicans don't have the gumption necessary to even start a scandal. And that's if they could win a Presidential election, which they can't. The Republicans are a status quo party concerned with re-election and not much else. If they can keep things on an even keel without rocking the boat too much, then that's their goal. If Republicans are unwilling to give power back where it belongs, in the hands of the people, then how could you think they would be willing to engage in scandalous activity? Not a chance. Republicans are wimps, and now that us conservatives are onto them, they will have a hard time winning elections.

It turns out-- working against Romney was the IRS, Mainstream media, and a handful of conservatives. How could Obama lose? Perhaps there is some magical person who could have... who?

Three million plus is a big handful.

Anyone except a liberal like Romney could probably have won. The problem was that there was no difference between the candidates.

There is NO way to prove what the political mindset of the "3 million" was. Some might have figured there was no way with the existing economy Obama could win re-election, so they didn't bother. There is no way to tell even if the "3 million" is the same "3 million that voted for McCain.

A hand ful of conservatives... as proven by ALL the TV conservatives who endorsed Romney. The IRS, and the MSM. And of course the cheating at the polls. Chicago-style politics, the IRS, the MSM, and a handful of Conservatives. Perhaps they will combine and come up with a candidate for 2016. Can't beat 'em...

In my opinion, the establishment, party first, Republicans indorsed Romney. The conservative base did not support him at the polls.

Without the support of the base, no Republican is going to be elected.

There is no "proposed" about it. The Boone Planners are most likely giddy at the thought of raising taxes. Having the Town Manager "propose" the increase gives the Liberal High Command political cover - similar to their hundreds of closed door meetings.

Mayor Clawson, a woman who was swept into office with a total 787 votes, was talking about raising taxes on 17,000 Boone residence months ago, "Of course a tax increase will have to be considered," she said.

But hey, let's give the Planners credit where credit is due. The proposed budget does away with their $118,000 lobbyists fees. Oh wait, never mind, they just shifted the cost to the Water and Sewer Fund. This "shift" seems logical though - most lobbyist operate in the sewer.

The Boone High Command is not found of suggestions. With that said, one brave individual could suggest they not spend hundreds of thousands of dollars to sue the County - a law suite they will certainly lose. But it seems the Planners enjoy losing in court. How much side-walk money did they spend to lose against Phil Templeton - $600,000?

Bill and Hillary Clinton are the lowest of the low. Bill said Obama is unqualified for the job. Yet he put his country at risk to advance his and his wife's political future and worked to get him re-elected when Obama was slipping in the polls. He is a hero of to Democrats everywhere.

The Republican primary for the U.S. Senate in North Carolina is going to be interesting ..... and we still haven't heard from Virginia Foxx.

I don't think Mrs Foxx will run! I will support her 100% if she decides to, but I think she is probably happy to represent us in the House!

At this point, I will support Tillis. I have met him a couple of times and I like him. He is perhaps a little more 'moderate' than I would hope for, but unless and until I see a better candidate, he has my vote!

I will wait to see how the field shapes up. There may be multiple candidates to choose from.

Foxx would be my first choice. I would support Tillis over Hagan, but would look strongly at the other candidates in the primaries. Tillis had to be deluged by pro gun rights people's communications before he allowed H937 out of committee. There are several good bills still bottled up in committee due to his influence. He says they do not poll well.

There is also the fact Tillis was going to call Larry Pittman on the carpet for publicly complaining about several of his bills being treated like this. Pittman is probably the most conservative member of the legislature. When several grass roots conservative organizations heard of the meeting, they attended and Mr. Tillis was not happy. He ended up being the person on the carpet.

Mr. Tillis also has be censured by one county''s Republican Committee for his interference in that county's primaries (I believe). I understand there are other counties following suit.

However, I will have to say that after Tillis did support H937, he did so very well and very aggressively. It just bothers me that so much pressure from the constitutes of North Carolina had to be applied to get him to do so.

Are the liberals who comment here stunned into silence at their discovery of Obama's Nixonian on steroids ways with thuggery added for smell?
Well, if it makes you feel any better, the writing was all over the walls and Conservatives knew what Obama is from the start.

Sark,
They cannot defend the indefensible. Sadly, they will not do the honorable and honest thing and admit that Obama is Nixon on steroids and call for serious consequences. Their silence is the same as acceptance. At least with Nixon, the tipping point leading to his resignation was that Republicans began to support impeachment. Libs will NEVER do this with Obama. They will remain silent, defending Obama with their silence, or they will make muted, general statements, like, "Well, if it's true, there should be an investigation." We truly are the principled ones.

And in his notes, Otash claimed: 'I listened to Marilyn Monroe die.'
He recorded that on August 5 1962, she had a violent argument with the Kennedys and that she felt that she had been 'passed around like a piece of meat'.
The notes read: 'She was really screaming and they were trying to quiet her down.
'She's in the bedroom and Bobby gets the pillow and he muffles her on the bed to keep the neighbors from hearing. She finally quieted down and then he was looking to get out of there.'
Otash only found out she had died later on.

At last someone who understands the term "enemy combatant"

The media OUTS non-atheist companies. There should be a law against the founders of companies having religious beliefs. Especially if they support the Ten Commandments... they are subversive of the new establishment.

"Jay-Z used to be sort of what predominated, but now I've got a little Nas and a little Lil Wayne and some other stuff," Obama revealed.

ISLAMABAD, Pakistan (AP) - The Afghan Taliban are ready to free a U.S. soldier held captive since 2009 in exchange for five of their senior operatives imprisoned at Guantanamo Bay as a conciliatory gesture, a senior spokesman for the group said Thursday.///

Am I the only one who didn't know about this man being held captive since Obama became President 5 years ago?