LGBT Did Not Sink Governor McCrory 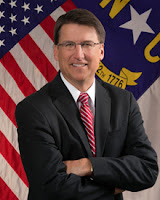 McCrory lost his re-election by only 10,277 out of 4.7 million votes, or two-tenths of 1 percent. However, repeal of the H.B. 2 "bathroom bill" is not the lesson to be learned from the election.

LGBT groups trumpeted that they had unseated the one-term governor over his refusal to back down to their bullying. Not so.

So how did a governor who has presided over a massive economic comeback lose his reelection bid? It can be shown that he lost because of a high number of Charlotte voters over a specific issue. A post-election comparison of votes from this highly Republican part of the state reveals that McCrory received 33,775 fewer votes in 2016 in these areas of the state than he did in 2012—enough to cost him the election.

The proof is supported by the fact that all the candidates at other levels of government and who supported the "bathroom bill" won with flying colors. These included the main proponents of the bill.

For the whole story in detail see The Real Reason
Posted by Blogger at 4:46 PM