The Real Motivation Behind the UN Vote Against Israel 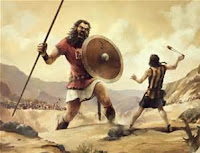 A little while back, one of our lefties wanted to know why I had such a thing for Israel. Now Israel is again center stage. So I am responding again.


The importance of Israel begins in Deut 32:8 (ESV) with these passages when: "the Most High gave to the nations their inheritance, when he divided mankind, he fixed the borders of the peoples according to the number of the sons of God.(70)" "But the Lord’s portion is his people, Jacob (Israel), his allotted heritage."
As I have written before, many of these 70 sons of God that were installed to rule us, have wrecked this planet.

What does all that have to do with the significance of Israel? Israel is the spot where God invades the earth and begins to establish His kingdom over against the other gods. It is also where He will return.

As the disciples began to preach the Kingdom of God, the first thing that happened was they were thrown into prison. Realizing the battle had begun, they rejoiced and declared "Why do the nations rage and the peoples plot in vain? The kings of the earth rise up and the rulers band together against the Lord."

The vote in the UN this week was unanimous. All the rulers banded together against Israel. Only with my Biblical world view can I make sense of all the nations coming together to create an existential threat to this postage size country.
Posted by Blogger at 10:39 PM

Email ThisBlogThis!Share to TwitterShare to FacebookShare to Pinterest
Labels: The Biblical story behind UN vote