Obama Says He Will Stay in Washington to Slow Trump Down 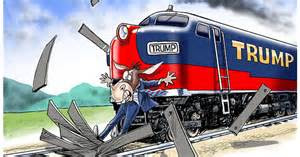 Email ThisBlogThis!Share to TwitterShare to FacebookShare to Pinterest
Labels: Obama and Trump

Obama will be back to his old self, feet up on the desk writing another book about himself. He couldn't even catch a train much less slow it.

Sark you may have too many zeros, but I expect it does seem like that many in Texas.

But Sark you may be on to something. The Hispanics from Latin America are mostly campesinos, rural. They have two motivations for having many children. Children are to work the farms and children are a sign of one's manhood. They have not discovered yet that in this country, children can lead to poverty.

Children lead to poverty in this country when you're a white American unable to cash in on food stamps, free health care, welfare, rent assistance, or less regulation to open a business as is given to minorities through the minority owned small business act.

"White Americans don't need government help". Neither does any other race if the person being spoken of is conservative.

I see where Obama is getting his other woman with him, Valerie Jarrett to live with him in his underground bunker.

It's nice for those two guys to have the children's birth mother close by.