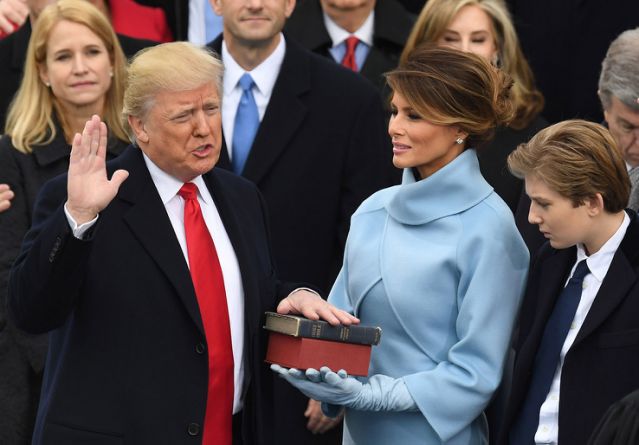 I second that, Wolf. So good to see Trump sworn in! What a lovely day.

"Machts Niches Bitches" - spoken by the arrogant left (noneymouse coward) during Presidential Race. Pride cometh before the fall eh noneymouse coward. Stings don't it. As the worthless Hussein obummer said "We Won, You Lost, Get Over It." Time to live by these liberal left inspired words. Pigeons coming home to roost. LOL

Conservatives won. Liberals lost. How much crow can the liberal left digest?

Thank the Russians and the FBI!!

Ahh, the sore loser!! LOL!! Stings don't it. Didn't have anything to do with Ms. Bill Clinton and her shrill voice and death mask smile? Or the contents of the emails? Didn't want to mention that did you. LOL. Machts Niches Bitches!!!

We won. We won. Liberals lost due to poor candidates and a candidate who tried to stereotype and further divide. LOL

Waiting for the reveal of Trump's Russian piss video.

"This is not America!"

nonymouse coward, aren't you the one who said "Machts Niches Bitches?" LOL. And now you're reduced to talking about Russian prostitutes as your reaction to the peaceful transfer of power? Pathetic at best. Where's the tolerance you leftist extremists claim to espouse? You sound like a whiney petulant child (again). We won, we won, we won. LOL Stings don't it.

Many ministers have likened Trump to the Biblical Nehemiah who rebuilt the temple after a long time in Babylonia captivity. As he was finishing the work some of his detractors demanded Nehemiah come down and talk. Nehemiah famously refused saying "I am doing a great work." Pictures of Trump working today while the women marched made the Nehemiah analogy more cogent.

Of course, the story of Nehemiah is a myth. Women marching against soon-to-be-impeached criminal, racist, misogynist criminal is reality.

Nonymouse coward, Wasn't it you who proclaimed "Machts Niches Bitches"?

What other stories do you consider a myth? Maybe Stalin killing millions, Black Panthers intimidating voters in Philly during the obummer election, or maybe the fact Democrats are the party of the KKK?

What's the matter little person, too mad to figure out how to type a reply? LOL!!! You lost. You lost. We won. We won. Stings don't it.

Sure enough the chattering class carped that Nehemiah should have come down and talked to the women. There have been a lot of marches on Washington. The only one I remember a president coming down to talk to the marchers was Nixon when he came down to talk to us Vietnam Nam protesters. Then the doofus trivialized our sincerity by talking to us about football. He would have done better if he did what all the other presidents did.

The CIA will be our major method to destroy the asymmetric enemy ISIS. So visiting them first was brilliant.