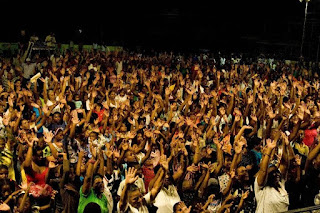 According to reports, Islam is outpacing Christianity. Not so. Islam grows by its birthrate and has few conversions. Christianity is growing by conversions. What’s more Christianity is all over the world, especially in nations located in the "global south" where the populations are exploding—Asia, Sub-Saharan Africa, Latin America, as well as China. In contrast to other religions, the followers of Jesus are literally showing up everywhere. Researchers observe that "Christianity is not only the largest religion in the world; it also is the least regionalized . . . There are only trivial numbers of Muslims in the Western Hemisphere and in East Asia. Christianity is even currently surging in the war-torn Middle East. It is even outpacing worldwide population growth.

While Christianity is advancing in much of the world, it is currently diminishing in the West due to the abandonment of the miraculous.   We have basically lost the supernatural, which means either loss of belief in the supernatural, to the loss of the sense of the supernatural. We no longer "experience the world as "enchanted"—Westerners no longer live in a world of spirits, demons, and moral forces."

Meanwhile, all over the rest of the world, massive supernatural healings, as well as other spiritual events are exploding. While evangelists in the third-world provoke the imagination of the masses, Western preachers are trying to persuade with politics, fierce moralism (think homosexuality, gay marriage, nagging people about their lack of charity etc. etc.)and hollow philosophical arguments. Leaders from the emerging world actually give the people something to see and hear, and all westerners do is placate, talk, and scold.

God is accomplishing incredible things, and we are mostly missing out on these wonderful stirrings.
Charisma
Posted by Blogger at 7:20 PM

Some of the conversion to Islam is Christian women marrying muslim men. It is then his religious duty to convert the Christian wife.
As I understand it, a Muslim woman cannot marry outside her faith so there is an imbalance there.

The Nigerian teenage girls who were kidnapped by the Islamic terrorist group Boko Haram were forced to convert to Islam. Their babies would then be born Muslim. Michelle passionatly Tweeted about it once. There are few conversions to Islam that are spiritual and there are many to Christianity that are.