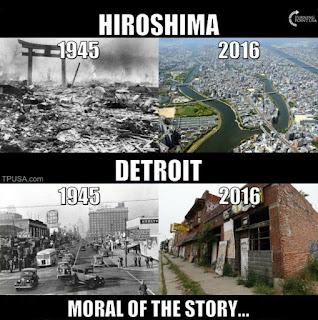 As someone who was born and raised in Michigan I can tell you that anything you have read, or seen, or heard about the Fall of Detroit is NOTHING compared to the horrors the Democrats have done there.

Until the Democrats came it was a modern, successful, prosperous city with opportunity for all.

Then the unions consolidated their hold on the city and the state by ending the Right to Work.

With that gone the left then had an expanding stranglehold on anyone who wanted to make a living.

The union funds were used to finance the total political take over of the state with the exception of some rural counties in the north.

They forced us to finance our own destruction, and the destruction of Detroit.

I would consider it justice to take ALL democrats and force them to live in the hell they had made.

Murder, rape, robbery have become the hallmark of the left.

If you click on the Google Images link above you will see a photo of tall towers on the waterfront that was the "Renaissance Center" (another democrat boondoogle) My father in law was the branch manager for IBM in Detroit and had his office there.

There were factories that covered square miles, and anyone who wanted to work, even without a high school degree like my Father, could make a good living.

Now it's being torn down for scrape metal, or to get rid of drug and whore dens and being returned back into farm land. ALL those good jobs are gone, families are gone and the dems are responsible FOR EVERY BIT OF IT.

Now that the left has a blueprint on how to destroy civilization I am greatly relived that Clinton wasn't elected to finish the destruction of the US that Obama started.

Detroit's decline is more about the failures of Capitalism, the Capitalist war on labor and racism. The decline has been in the process for over 70 years.
" A Time Magazine article entitled “Decline in Detroit” from 1961 — yes, 1961 — had the following to say in its opening paragraph:

If ever a city stood as a symbol of the dynamic U.S. economy, it was Detroit. It was not pretty. It was, in fact, a combination of the grey and the garish: its downtown area was a warren of dingy, twisting streets; the used-car lots along Livernois Avenue raised an aurora of neon. But Detroit cared less about how it looked than about what it did–and it did plenty."
Vision and architecture are essential elements for a thriving healthy society. Conservatives public policy fails because it lacks vision and is too cheap to invest in beautiful architecture or public mass transit.

You ran it, you own it lefties.

Lpov's linked source is to an opinion piece that does not list any sources for the opinions of Pete Saunders Mr. Saunders is an urban planner. This is not a very convincing reason to believe what he says. The deteriorating condition of our cities is a ewtamonial to the abilities of urban planners.

Do conservatives realize we can create millions of middle class jobs by rebuilding our infrastructure and cities? Conservatives had rather give tax cuts to billionaires, pay for a repressive police state, more prisons and a vanity wall that does nothing.

What do "Conservatives" conserve?

liberal socialist jackal pov said: "Do conservatives realize we can create millions of middle class jobs by rebuilding our infrastructure and cities?"

Uh, duh, that's why you lost the last election. Donald Trump is actually carrying forth with rebuilding infrastructure unlike Hussein obummer who spouted "shovel ready jobs, 8 years ago and didn't carry through with ONE shovel ready job. In fact, what infrastructure projects did barry sotero rebuild? That's what I thought, zero. LOL!!!!!!

A wall doesn't do anything? Have you asked the border guards what they think of a wall? Oh wait, you're too busy spouting liberal talking points that caused you to LOSE the last election to one Donald Trump. Machts Niches Bitches. You LOST. You LOST. The sour grape syndrome is in full effect, and liberal jackal pov is full of venom and lies that serve to separate extremist liberals from their more moderate counterparts. Keep it up my friend and you will give us another 4 years of excellent Supreme Court picks, rebuilt infrastructure, less welfare, less freeloaders (you), less illegal aliens, and more freedom, 2nd Amendment, liberty, and patriotism.

Oh, and enforcing trade rules and bringing back jobs to the USA are a couple of other promising the jackals don't want to mention in their pre-canned talking points. LOL. It's so much fun watching liberal jackals melt down into childish rants. It's proof WE WON!!!!!!!!!!!

How does it feel jackal pov to know you LOST and there is nothing you can do about it? Stings don't it.

Does anyone find it strange that Wolf's Head lived in Detroit and watched it crumble due to unions, liberals, and corrupt politicians. Yet the village idiot seems to know more than someone who was there and watched it happen! Typical liberal - claims to know more than anyone else even in the face of overwhelming evidence to the contrary. Good post Wolf's Head. I drove through Detroit a couple years back, and it's a third world country. Witnessing all the once great factories, churches, and houses which are now crumbling should be a required field trip for our failing public education system. Let the worthless teachers try and explain how unions, regulations, and high taxes are good for a place like Detroit. LOL!!!!!

JohnnyRico- I had always wondered what the end result of this country becoming liberal will be. I wondered how the architects of a liberal America would act when they see the results of a bureaucracy that weighs down productivity and individualism to the point of collapse. The Soviet Union collapsed from the weight of its bureaucracy and its assault on the individual. Detroit is that end result on a regional level. The liberal architects try to put the blame on anything but liberalism. Liberalism is rust. liberalism has no shame.

Here is a good video on the rebirth of America, enjoy.