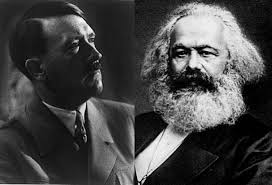 I have never accepted the term "Right-Wing" being used to describe the Third Reich. Everything Hitler believed regarding governing was the same as the Communists. The only difference was the nationalism as the Communists were globalists. The Nazis were nationalists, not patriots and they were racists. Both Hitler and Marx hated Jews. Marx was a secular Jew and a self loathing Jew as so many liberals are self-loathing. Liberal comments on this blog prove self-loathing is a liberal characteristic. Both Hitler and Marx hated Blacks. Marx wrote of "The Jewish Problem" ten years before Hitler.
READ MORE
Posted by Sarkazein at 10:39 PM

Do you understand the choices are not binary? The Nordic Countries as well as The Netherlands and Canada have strong social safety nets, less political corruption, free press, societies with greater education levels, more personal freedom and free market economies?

Liberal Jackal POV, Do you understand Nordic countries enjoy a radically homogenous population without constraints given by liberal jackals (you)and non governmental organizations like the NAACP? This, as inconvenient as it is for the typical liberal, is highlighted by the fact Nordic countries don't have, or allow, unmitigated immigration like we do here in the United States. They also laugh at our "education system" that spends as much time on made up social justice issues as is spent on education. When you have a majority of society working to contribute to a socialist system like the Nordic countries have it may work for them (they are still socialists), but such a system would not work here in the U.S. as there are not enough of us hardworking taxpayers to support the slackers (you).

Tough to accept I know, but the truth nonetheless.

Here's a speech hat shows the Liberal vision for America.

Why do you consider Communism an enemy of the USA? Some of our strongest trading partners are communists? China and Vietnam are strong American trading partners. North Korea is clearly a totalitarian communist adversary. Russia is clearly a totalitarian Oligarchy adversary.
Communist Cuba is still a totalitarian but no threat to American citizens. The aging leaders are under pressure to move to a free market, socialist Democracy like the Nordic countries.
Trump's days are numbered, he will be impeached soon by Republicans.

Another article about Socialism and its path to dictatorship. Most recently Venezuela-