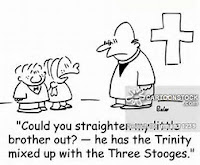 In republishing the article God Picked Trump for president, I looked back over the comments which included:

Dickson "If God chose Trump... he certainly didn't consult his son before making that decision."  I observed that Dickson is not much of a Trinitarian." So now I must respond.

God in His essence is one person with three manifestations, Father, Son, and Holy Spirit.


The first manifestation we meet of the Father (Yahweh), is in the Tanakh. (Libs on this blog are always insulting this manifestation because of His violence.) From the Tanakh we learn that at a point, Yahweh gave up on the rebellious human race and assigned us to other elohims. Among them were 70 of His Sons.

Like us, these elohims had free will and they set themselves up as gods to be worshiped. Yahweh selected one small tribe, Israel, to take back from His Sons, a small plot of land. The war between Yahweh and His Sons’ followers was bloody. (It is those battles where Yahweh received the reputation that turns off the Libs–a violent family feud.)

Now go back with me for a moment. Yahweh had a secret plan.  From their captivity in Egypt, Yahweh had been teaching them a spiritual image of something to come. It begins when they were told to place the blood of an unspotted lamb over on doorposts and the death angel passed over. When they settled in the promised land, they were taught the model of a temple (which we later discover, we humans are a replica of.)

To cleanse (sanctify) the inner sanctum of the temple, the blood of an unspotted lamb was called for. Then Yahweh finally reveals what He had been up to all the time (and hidden from the elohims.) The second manifestation of the Trinity, Jesus, the uniquely (only one of its kind) begotten Son of God(the unspotted Lamb) gave His blood to cleanse the temple.

And, now we meet the third manifestation which is the Holy Spirit. We learn that we are the temple of God and now our inner sanctum has been sanctified, by the blood, suitable for the Holy Spirit to indwell. At Pentecost, the disciples realized the Holy Spirit had entered them, manifesting in them the same power that was in Jesus and even giving them a spiritual language with which to communicate with Him. When even the  Gentiles began manifesting the Holy Spirit, the disciples realized they were now to do what Jesus did--the same God, working through them with the same mission of taking territory stolen by the evil elohims--now with bloodless weapons.

Then in the final chapter Yahweh at the head of His own elohims, will capture and imprison all the renegade elohims and their followers.

Those of you who have eyes to see by now should realize why I, Blogger get so irate with the childish, Sunday School pablum of the libs on this blog. Especially when they super piously try to tell me what Jesus would do. They are pathetic.
Posted by Blogger at 5:21 PM

Email ThisBlogThis!Share to TwitterShare to FacebookShare to Pinterest
Labels: Trivializing the Gospel by libs, Trump chosen by God, War of the gods

What does all this mean about God picking Trump? If you had been listening carefully you would have heard Hillary say she believed in the freedom to worship. She did not say she believed in the freedom of religion. The libs were PC violently pushing Jesus' disciples to be out of sight and back into buildings. Satan was using the left to stop the churches' warfare to defeat him and all the other elohims.
Trump told us right up front how we would release the disciples to fight the elohims of darkness wherever they were encountered. We believed him and the savvy believers put him into power according to God's desire. The lukewarm Christians remained clueless.

By the way, like everything else about Trump, even before he was inaugurated, we were free at last to say Merry Christmas in public, and we did.

Then we prayed at the inauguration. And you want to know why there is a Trump Derangement Syndrome? He is driving the demonic world nuts. Next he plans to release the ministers from fear of the IRS. I only wish the ministers would get off the moralism and the guilting people and preach the gospel. Gospel means good news not the crap so many preachers are throwing on the people.

The gospel is trivialized because it is trivial. Myths and supernatural are the example of triviality.

The liberals worship their own god...

I remember the sign that used to be in front of the unitarian "church" on King's Street that read "Home of Liberal Religion in the High Country".

For which countries does God choose the leader? Please provide a list.

Commenter 11:23 PM used a Capital G. A small break through, but something.

Which countries, I don't know. He only told me about this country and that was on the day Trump came down the elevator to announce.

"For which countries does God choose the leader? "

All of them, but not necessarily in the same manner.

It seems your God is a cruel, grumpy old white Republican.

It seems your chosen deity is a faceless, nameless blob concerned with stereotyping others that disagree with it? Or choosing a violent, oppressive religion over a peaceful one. When did you sign up?

"Or choosing a violent, oppressive religion"

That would be conservative christianity.

Really, where is the violence from "Conservative Christianity?" I've not seen any in my lifetime.

Are Christian Conservatives stoning women, killing gays, forcing women to cover themselves in shame, engaging in Fatawah against those who don't believe in God, blowing themselves up to kill non-believers? So, noneymouse coward, enlighten us. This ought to be interesting.

You answer my posts again with irrelevant videos; this time from tribal factions in the far reaches of laweless Africa. Is this the best you can do? Liberals are the cause of what's happening in Africa. Your anti personal responsibility policies and disarmament of innocent villagers allow extremists, communists (the party you support), and criminals to attack without fear of retaliation. Then you somehow try and blame it on Christians. Now I know how Germans in WWII supported Nazis in the killing of 6 million Jews. Or communists in Russia supported the mass murder of 40 million innocent people during the great purge. There are many dolts in this world susceptible to talking points of a few. You fall into this category.

Or it could just be your too lazy to engage with me in meaningful rhetoric. Which is it? LOL

Machts Niches Bitches - we won, you lost. Get over it (words spoken by one hussein obummer in 2012).