A Gaffe in Washington is When Someone Unintentionally Speaks the Truth 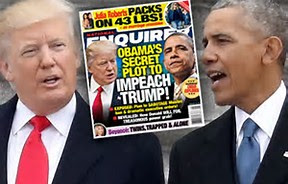 In the Trump surveillance story,  TV interviews of former Obama administration official Evelyn Farkas (Deputy Asst. Secretary of Defense) have been buried by the Trump enemy media.  In that interview, I find admission of awareness of wrong doing as well as motivation.

Admitting the surveillance, Dr. Farkas said “I was urging my former colleagues, and frankly speaking, the people on the Hill [Democrat politicians] get as much information as you can – get as much intelligence as you can – before President Obama leaves the administration.

Because I had a fear that somehow that information would disappear when the senior [Obama] people  left; so it would be hidden away in the bureaucracy, that the Trump folks – if they found out HOW (admission of wrong doing) we knew what we knew about their, the Trump staff, dealing with Russians – that they would try to compromise those sources and methods; meaning we no longer have access to that intelligence

In another interview two weeks before the election she said “ if Trump won the presidency he would “be impeached pretty quickly.” (Motivation)

Thanks Dr. Fargas  now at last we get it.!  The whole crime  was to gather information to be used to hopefully impeach Trump in case he won.
Posted by Blogger at 5:10 PM

Democrats have to know that at the Federal level, impeachment is reserved for those who may have committed "high crimes and misdemeanors" and where presidents are concerned, their actions were while in office. No president has been charged for actions outside of office (Clinton’s was for lying under oath while in office). Of course Trump derangement is causing some weird behavior.

There is even a town in La La Land Calif. threatening to impeach Trump.

Liberals consider being conservative an impeachable offense. They both have no clue as to law and proper procedure and have no hope for doing better. They actually think not agreeing with them is against the law.

I swear I really think you said it all here. What you said is the only way to make sense.

At least when Nixon tried to bug the Democrats at Watergate, he didn't use US government agencies to do it and he didn't use US taxpayer's money to pay for it. It wasn't even Nixon's idea, it was John Dean's idea and caper.
At least Obama won't drop his Secret Service protection to pay for private security as Nixon did, Obama's too cheap and he's a Democrat. Democrats never get rid of government programs. But this will make it easier to pick him up for trial as the Secret Service will happily hand him over to the US Marshals.

What do conservatives conserve? Not human rights. Not rivers and streams. Not clean air. Not constitutional rights. Not Religious Freedom. Not representative government.

What does the troll's post have to do with the topic of the thread? Nothing. He cannot argue with the primes of the liberals fearing the truth. This is proven by his being wrong on ever topic with which he tries to hijack the thread.

What do liberals liber? Duh.

Sorry if I have ask you good old boys a question too difficult for you to answer.

Yeah, you mean like how many billions of my taxpayer money were spent on Solyndra? Oh, or why Hussein obummer claimed executive privledge in why he hasn't, to date, answered question on Operation Fast in Furious in which the obummer administration smuggled guns into Mexico in order to claim American guns were causing crime. You mean those types of questions? Or we could go on to one of the main questions that caused you TO LOSE the last election - What really happened in Benghazi?

Yes, it was questions like these that caused the liberal socialist jackals like noneymouse coward to LOSE. And LOSE BIGLEY!!!! LOL!

Anonymous 758 am, you are not really sorry for asking a question too difficult to answer. Now you answer this similar one: Have you stopped beating your wife?
The 10th amendment of the Constitution is: "The powers not delegated to the United States by the Constitution, nor prohibited by it to the States, are reserved to the States respectively, or to the people." Amendment X All your questions are always non sequiturs resulting from your obvious ignorance and do not deserve a response.

I notice you didn't want to touch the questions I asked of you - Solyndra, Benghazi, and Fast and Furious. Tough questions; too tough for you to answer. Again, this is why YOU LOST and WE WON. What was it that bumbling, snarky liberal jackals said a few days before the election? Wasn't it something to the effect of "Machts Niches Bitches" or something like that? LOL!! Perhaps you should answer the overarching question - Why did liberal jackals LOSE the election? LOL!!!! Stings don't it.

All the liberals should donate a "reason" to Hillary for why she lost. I think she's stuck at 16 reasons now.

Yep, investing Doomsday Preppers cancellation along with Solyndra, Operation Fast and Furious, Basil Eleby, the Blowing Rock Land Trade, Benghazi, the farmer/septic tank issue out in Aho, and many other government sponsored depredations. Why do you support such depredations?

Good that you fixate on things that matter. Any worry about Russian influence in American elections, or is that just more liberal nonsense?

"Any worry about Russian influence in American elections"

Not nearly as much as I had when Obama told Putin that he could be much more 'flexible' when he was elected as a lame duck. He had already demonstrated he as Putin's bitch.