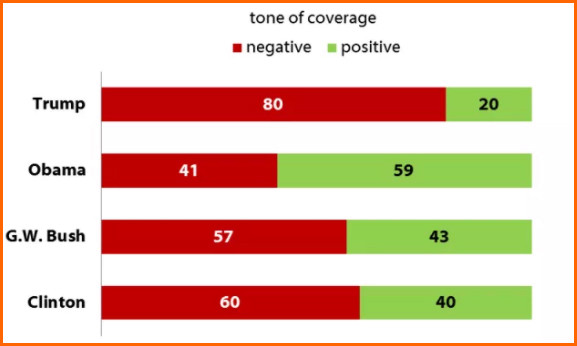 President Obama was and is a very positive and smart human beings who surrounded himself with smart good people.

Trump has done nothing to garner positive coverage.

Trump did something positive? What ?

Trump did something positive? What ?"

Almost everything he has done.

I see you're unable to name even one thing.

Goofus, I see you either have no reading comprehension skills or you do not understand the English language. Almost everything he has done indicates multiple issues. Multiple means more than one.

Surely you have a favorite positive accomplishment you're willing to share? Republican politicians are now putting lots of space between themselves and Trump. Few Conservatives politicians are going to want ads showing them and Trump in the same photograph. Admit you were just scammed by Trump's appeal to your own bigotry and ideology.

Goofus, my favorite Trump accomplishments are in fixing gun control legislation, his rebuilding the military, and his pro law enforcement initiatives. His appointment to the Supreme Court also is a favorite of mine as is eliminating two laws when passing one. There are many others.

Trump certainly does agree with a lot of my ideology. This is unheard of. You almost got something right. You could have had a correct statement if you had said establishment Republicans. Now, exactly how am I bigoted, pray tell?

I gather you think the coup is working?.

He did appoint Neil Grouch to the appointment Republicans stole from the Obama Administration circumventing the Democratic process and representative government. The Other issues are what Trump does best, just BS. No legislation has been passed under the Trump and most of the Executive Orders ( which Conservatives called out under President Obama ) have been struct down as un constitutional and Un American by the courts .

Border crossings are way down, the deficit is going down, job numbers are rising. Trump did all this just by being Trump. He spoke and the earth moved. The biggest thing he did though was rid us of the corrupt Clinton machine.

And, he made Chuck Shummer (sp) cry.

Goofus, noting was stolen from the Obama administration. Saying it was is an exercise in "sour grapes".

How many executive orders has Trump made and how many have been overturned.
? I believe that "most" should be "a few". How many of those that better were overturned wee done by judges legislating from the bench? I am certain that yoru reply will once again be 100% wrong.

Obama passed one piece of legislation - Obamacare. Everything else he did was by executive order. The Republicans blew it when they decided to repeal Obamacare and replace it with Obamacare lite. Many of them held their ground, wanting a full repeal and a better bill be developed. Trump took it on the chin because he backed the Obamacare lite faction.

In any case, every other thing Obama accomplished was by executive order. Trump has overruled many of these and could overrule hem all with a stroke of his pen. Of course in eight years, when Trump ;eaves office, the same thing could happen to his executive orders. Therefore an executive order is an accomplishment, but not necessarily a permanent one.

I would still like to hear why you think I am bigoted and if you think the coup is working.

Here's a list of 50 accomplishments under President Obama. Which do you disagree with?

Anonymous - anything Obama did in his 8 years is Bush's legacy or fault. Obama has no legacy. Yet.

That is some propaganda piece, Goofus. It is an opinion piece that tries to present failures and detrimental actions as accomplishments. From the stimulus package that stimulated nothing but succeeded in wasting money to the claim of the creation of jobs when in reality thousands of people gave up and left the workforce thereby resulting in de facto negative employment, to tearing down the military capacity of this country, to claiming he improved our foreign relations when in fact he made us a laughing stock with his apology tours. to bragging about his creating excessive restrictions on businesses through the EPA and other agencies this article has almost everything wrong. Bin Laden was taken out under Obama's watch using information Bush gathered using methods Obama is credited with stopping by this list. This is hypocritical.

In fairness, I do believe the list missed and actual accomplishment of a sort. This was Obama's better late than never granting of permission to take out the Somali pirates.

I am still interested in why you think I am bigoted and if you think the coup is working.

Guy everything you wrote is all true and more. Isn't it amazing that so many Americans don't even realize it.