CNN The Swamp That Needs Draining 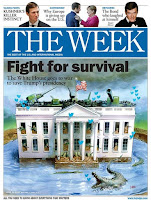 “In the sixth month of Donald Trump’s presidency, we are witnessing an unprecedented meltdown of much of the media. Standards have been tossed overboard in a frenzy to bring down the president.”

“What started as bias against him has become a cancer that is consuming the best and brightest. In
rough biblical justice, media attempts to destroy the president are boomeranging and leaving their reputations in tatters.”

“CNN is suffering an especially bad case of Trump Derangement Syndrome, even trying to make a virtue of its hostility to the president.” The  secret recording of a CNN producer by James O’Keefe’s Project Veritas catches the producer saying that CEO Jeff Zucker relentlessly pushes stories on Trump’s ties to Russia even though, the producer says, the subject is “mostly bulls–t.”

On the Russia story, CNN ran 353 minutes of airtime since May 17, compared to 47 minutes on Trump’s decision to withdraw from the Paris climate pact, 29 minutes on the fight against terrorism, 17 minutes on the efforts to repeal and replace and ObamaCare, and 47 seconds of coverage for tax reform.

“It is all  really, really embarrassing to those of us who love journalism’ the author declares.

Rightfully so, the man is not fit to serve.

Trump lacks the Character or morals to serve on any ethical public board requiring public trust.

"Trump lacks the Character or morals to serve on any ethical public board requiring public trust.: In the opinion of the Goofus contingent. Who cares about them?

There is no evidence of "collusion." The village idiot probably couldn't define "collusion" without "using his google" to first look it up. As the post states, a CNN producer admits that the Trump-Russia collusion story is "mostly BS," meaning that they have NO evidence, but they are using this fake story to damage the president. A Russian hacker, or perhaps a Russian agency (outside of the control of the US and Trump) provided information to Wikileaks (also outside the control of the US and Trump) which Wikileaks then published. For collusion to exist, libs and the liberal media will have to PROVE that Trump worked with those parties to gain some sort of advantage. NO ONE has found ANY evidence of this, hence, FAKE NEWS that the village idiot keeps parroting.

Here's what I think is hilarious about liberals and their faux outrage about Russia (in spite of Hillary's and Obama's coziness with Russia -- remember the Staples button "reset" and Obama caught on live mike telling the Russian ambassador that this is his last election and he will have more "flexibility?") -- liberals are outraged because Russian hackers broke into the Dems emails and EXPOSED THE TRUTH!. (Maybe if Hillary hadn't maintained a private server in her closet at home IN VIOLATION OF THE LAW, Russia wouldn't have been able to break into the emails!!!) They are mad because the TRUTH was exposed regarding Debbie W-S rigging the Dem primary for Hillary and against Bernie. They are mad because the TRUTH was exposed regarding CNN giving debate questions to Hillary's campaign before the debate (talk about "collusion!").

On another thread, the village idiot continues to push the FAKE storyline that Obama had NO scandals his entire presidency. HAHAHAHAHA! Just because he refuses to SEE the scandals does not mean they do not exist. People that are not blinded by their liberal partisan attitudes know about Benghazi (and the FAKE attempt to blame the attack on a video), gun running to Mexican drug cartels and using the IRS to persecute conservatives are just three examples of Obama scandals. There is plenty of evidence regarding these scandals. So the idiot believes what is NOT true, and refuses to believe what IS true.

And he still has not condemned the violent shooting of Republicans.

"It’s not controversial that Russia sought to influence our presidential election: seventeen federal intelligence agencies have already confirmed it. Among other things, over the summer of 2016, the FBI and state election agencies detected Russian cyber-intrusion into voter registration systems.

That same summer, a Kremlin-linked hacking operation gained unauthorized access to Democratic Party email accounts, and distributed them to WikiLeaks."

To repeat what I said in my earlier post: "For collusion to exist, libs and the liberal media will have to PROVE that Trump worked with those parties to gain some sort of advantage."

If Russian hackers or the Russian government hacked the DNC emails, that alone is NOT collusion. If Russian hackers provide info to Wikileaks who then publish it (all truthful by the way -- I notice you did not contest the truthfulness of the revelations -- WHY are liberals so afraid of the truth?), that alone is NOT collusion. Those entities, outside the jurisdiction of the United States, chose to take those actions on their own. Collusion would be a verifiable link from Trump to those hackers or the Russian government proving Trump requested such action. EVERYBODY, from CNN producers (who call it a BS story) to Democratic congresspersons say NO EVIDENCE exists. Maybe Russia did hack the DNC emails, but they did it on their own. THAT is NOT collusion. Maybe Russia or Russian hackers did this to damage Hillary because they THOUGHT Trump would be better for them. The current tension over ISIS and Syria would seem to prove that wrong.

This conversation it too complicated for you to follow. I fully expect you to reply with just another cut-and-paste link or quote from some unreliable liberal hack site because you are incapable of writing anything on your own that is not simply baseless accusations or "Trump is bad" type comment.

And you still have not unconditionally condemned the shooting of Republican Congresspersons.

Anonymous said, "Trump lacks the Character or morals to serve on any ethical public board requiring public trust."

YOU lack all morals and character by your despicable refusal to unconditionally condemn the cold-blooded shooting of Republicans.