Hillary, sitting in an air conditioned studio, uses the term "Resistance" to describe her non acceptance of the 2016 election results. She is a multi-millionaire who was chauffeured to the studio and surrounded by security. She and other Leftists, cheapen the name "Resistance". Freedom loving French, Hungarians, and other Europeans fought with inferior weapons and no armor against Hitler's Authoritarian Socialist Regime. Some were executed without trial in front of family, some died from exposure while living in the forest. They were brave men and women whose name "Resistance" should not be sullied by spoiled snowflakes and chubby failed politicians. The Left has no shame. 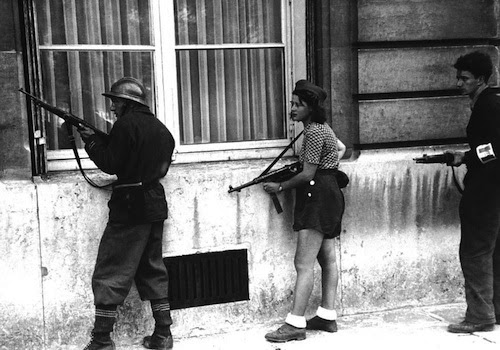 Posted by Sarkazein at 9:08 AM

The 2016 Presidential Election was stolen be voter suppression and conspiricy between a corrupt, unethical con artist assisted by Russian weaponized hacking and Fake News inserted into America media and social media. The margin of victory in three states combined was only 77,000 votes but nationally Hillary won nearly 3 million popular voted. Trump is unethical, incompetent and appears to be suffering from some form of dementia .

The USA supplied some guns to the resistance that were only good for one or two shots. The idea was to kill the NAZI Socialists and take their weapons and use those.

You history is alternative BS, the Nazi were supper patriotic right wing Fascist, supporting nationalism, racism and Christianity with a steady stream of propaganda . Does any of that sound familiar?

Goofus is now into the change history to suit himself troll mode. I wonder how hw explains the Liberator pistol and the Warsaw Ghetto uprising.

A system of government that flourished in Europe from the 1920s to the end of World War II. Germany under Adolf Hitler, Italy under Mussolini, and Spain under Franco were all fascist states. As a rule, fascist governments are dominated by a dictator, who usually possesses a magnetic personality, wears a showy uniform, and rallies his followers by mass parades; appeals to strident nationalism; and promotes suspicion or hatred of both foreigners and “impure” people within his own nation, such as the Jews in Germany. Although both communism and fascism are forms of totalitarianism, fascism does not demand state ownership of the means of production, nor is fascism committed to the achievement of economic equality. In theory, communism opposes the identification of government with a single charismatic leader (the “ cult of personality”), which is the cornerstone of fascism. Whereas communists are considered left-wing, fascists are usually described as right-wing."
http://www.dictionary.com/browse/fascism

Fascism is the government control of private property and businesses.

socialism
noun
1.
a theory or system of social organization that advocates the vesting of the ownership and control of the means of production and distribution, of capital, land, etc., in the community as a whole.

Maybe you do not consider government to have anything to do with a community.

In any case, Sark's post was concerning killing an enemy and taking his weapons to better arm yourself. you seemed to be denying this. Hence my post.

Not everything under the sun is because of democratic socialism stupid.

Infrastructure, the military, the courts are the functions of a Constitutional Republic. You know, like AMERICA.

The other trappings you list are not the functions of the government of free people, but elaborate wealth transfer schemes meant to punish those not in favor and send the wealth to the idiot, like you, voters who give the government monsters more power so they can steal more for you.

You're just a thief using government as your proxy.

Goofus, in addition to the things Anonymous : posted, I would add Medicare and Social Security. I do this because you are forced to support these your entire working life and they are a way to recover some of what has been stolen from you.

As far as I am concerned the government made a contract to pay these monies to people when it forced them to participate in them. Of course the contract is an illegal Ponsi (sp) scheme.

We've established that Conservatives do want some levels of Democratic Socialism.

The next question is it the role of government to work in the common good of society or in the interest of Capitalists ?

When government works in the interest of society we have regulations on Capitalism's ugly side of exploitation of workers, consumers, the environment, fair tax laws, and penalties for corruption.

Wrong again Goofus. Social Security and Medicare are not examples of Democratic Socialism, but are debts owed the working U.S. citizen due to the extortion of the Government.

Like most conservatives your critical thinking skills, are lacking. Public Education, Medicare, Medicaid, Social Security and FEMA are very much forms of Socialism as are Fire Departments, EMS, Police, Courts and public infrastructure.

Goofus, they are the same people.

You are still 00% wrong. This is amazing. Even a blind hog should find and acorn at some point.

Annoyance- I take it by your old worn out comments on this thread that you are embarrassed by Hillary comparing herself to the heroes of the WW 2 Resistance and that you would rather distract from her idiocy with you own.

I see you don't want to do any critical thinking by you trying to change the subject. How did Hillary get into this discussion?

Are you saying a predatory payday loan charging usury fees to a US soldiers has the same interest as the US soldier, his wife and children? You're saying a Hardees employee and the franchise owner share the same interest of keeping labor cost as low as possible? The con Artist for profit educators scamming young people into borrowing huge student loans and giving them little or no marketable skills like Trump University did, both the students and the owner of the bogus school had the same interest? You're saying Duke Energy, the home owners and communities down stream of leaking coal ash ponds both had the same interest? You don't think Raw Capitalism ever need to be regulated or sued for damages in class action laws suits allowing a group of individuals to have a level playing field against massive corporate attorneys ?

"How did Hillary get into this discussion?"- Goofus

This is too funny to even offer a sarcastic comment in return.

Goofus, your questions have nothing to do with what I posted. The citizens of this country are capitalists unless they have been enslaved by entitlement policies of those such as yourself that want to keep them dependent on government in order to insure their votes. Since a good or service is only worth a finite amount of money, then inflating the amount paid for it only causes inflation that means the overcharge helps no one.

You failed to explain how a single worker and say a coal mine operator have the same Capitalist interest. The Mine owner spends little time in the dangerous mine and will take his profits and abandon both the miners and the community with polluted ground water, streams and black lung disease. The mine owner gets the money and the miners get the shaft.

I don’t need to tell anyone that we have a divided country. The commenters on this thread have zeroed in to the major division. What is the role of government? The conservative side wants to return to the philosophy of the best government belongs to the people and it is the government closest to them. The other side now envisions a highly centralized government run by an elite establishment. I am impressed that both sides are using this blog to have this most basic debate for our times.

Conservatives are being very timid about stating their realistic vision for America and the details of what that would mean for citizens.

Do conservatives believe Capitalist will self police and report defective air bags'and contaminated peanut butter? Will Wall Street and Banking self regulate and act in a fiduciary manner to customers and investors without government oversight?

"Do conservatives believe Capitalist will self police and report defective air bags'and contaminated peanut butter? Will Wall Street and Banking self regulate and act in a fiduciary manner to customers and investors without government oversight" anon

Your multitude of bureaucrats and governmental parasites didn't stop any of that either. The dems are totally in bed with wall street and big banks. Obama received the most contributions of any candidate ever from those sources for his election campaigns.

Greed drives democrats. That is why they want everything you make.

"I don’t need to tell anyone that we have a divided country. The commenters on this thread have zeroed in to the major division."

White men should run the government. It's god's will.

"White men should run the government. It's god's will."

A sentiment that is very near and dear to Wolfie.

If your point is someone should have gone to jail or the fines should have been greater, I'm on your side.
That's not what Republican politicians are doing. McCrory first was only going to fine his former employer $25,000 for the coal ash contamination of the Dan river. Oligarchs want to control government, having corrupt politicians as their personal agents.
Republicans consistently fight regulations designed to protect the general public from unethical business practices.

You assume the dems are different from the repubs. They're not.

Wolfe, someone described the Dems and the antiTrump Repubs as riding in the backseat of the car with Trump driving and hoping he will crash.

Goofus, no two people have the same capitalist interest or any other kind of interest. This is because everyone is an individual with goals of his own. While these goals may be influenced by a person's situation, they are not limited by it in a capitalistic society. You, on the other hand, enslave people into poverty in order to get and keep their votes with your "democratic socialism" that holds them in a victims role.

Guy,
You continually spin words into fanciful sentences with no basis in reality or fact, save that of your own fevered mind.

Thank you for your affirmation of my opinions, Goofus. As you are always wrong, your negative comments should be enough to stand up in court as proof I am right.

Blogger, can you move this discussion to the vent page where it belongs. I apologize for helping Goofus high jack the thread. In any case, I will answer him there in the future.

The Conservatives here seem unable to articulate their realistic vision for America. Maybe because most conservatives have no vision only anger and criticism of those attempting to build a better world.
Conservatives actually believe all of America's problems can be resolved with more tax cuts for the rich, more guns, smaller social safety net, meaner police, more prisons, less diplomacy, more war, less regulations on those with political power and wealth, more Theocracy and more bigotry and racism. Conservatives know when their attempts at governing fail they can blame "those people "'( gays, transgender, liberals, Muslims, atheists, undocumented workers, teachers, university professors).