When You Are a Failed President 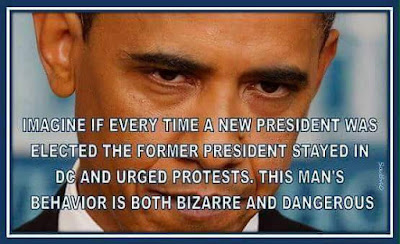 Hussein obummer reflects the thoughts, opinions and beliefs of a majority of liberal extremists (all liberal socialist sheep). These racist, bigoted, and violent liberals will stop at nothing in their quest for a nanny state government capable of taking everything. They will agree and support Islam even as it kills their own. They will support illegal aliens over American citizens even if it means giving scholarships to said illegal aliens over American citizen children. They will support large corporations (colleges) that enslave young people to unsustainable personal debt. They will support the modern day plantation that enslaves Negros through state sponsored welfare in far greater numbers than pre- Civil War. They support junk science (climate change) in an effort to further tax a disappearing middle class. Amazing ignorance that they too support a failed president (Hussein obummer) as he incites and foments violent riots that seek to destabilize a once great country. Amazing and sad.

President Obama is a reminder of what ethical, competent and positive political leadership should look like.
President Obama could win an election to a third term by 70% Marjory popular vote both popular and a near 95%electoral vote.
Obama is popular and loved all over the world.

Then why doesn't the communist obummer run during the next election if he's such a shoe in? Hussein obummer is a reminder of how stupid liberal socialist sheep (you) really are. obummer supported:
1. Solyndra
2. Largest deficit in history
3. Operation Fast and Furious - he refused to answer ANY questions
4. Started wars in Syria, Libya (he executed a foreign head of state), and Iraq
5. Created racial divisions in this country that won't ever heal (his sone looked like the thug Trayvon you know)
6. Lied and covered up Bengazi
7. Caused the deaths of countless police officers nationwide through his anti-cop rhetoric (Beer summit anyone)


The list goes on and on. Is this why he is "popular and loved all over the world?" Keep his photo by your bedside my confused friend, perhaps it will assuage your hurt feelings at LOSING THE LAST ELECTION. Macts Niches Bitches!!!!!!!

Trump's problems are Trump's making, President Obama is just a reminder of what a competent, knowledgeable and respectful political leadership looks like.