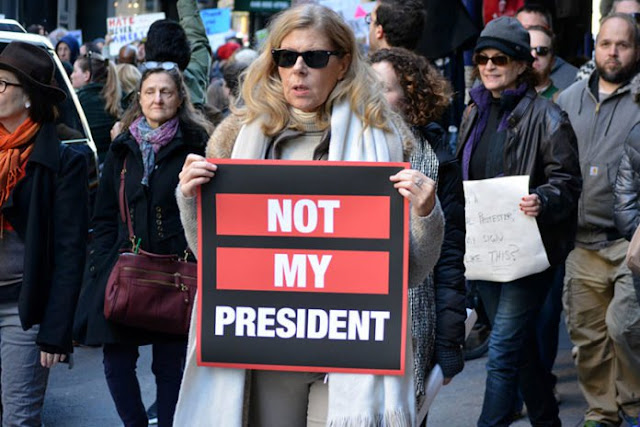 That's not Stormy Daniels, or Jessica Leeds, or Kristen Anderson, or Jill Harth, or Cathy Heller, or Temple Taggart McDowell, or Karena Virginia, or Bridgett Sullvan, or Tasha Dixon, or Mindy McGillvery, or Rachel Crooks, or Natasha Stoyonoff, or Jennifer Murphy, or Jessica Drake, or Ninni Laksonnen, or Summer Zervos, or Cassandra Searles, or the mother of his love child with the housekeeper. Of course, this is an incomplete list. So, who is in the picture that you claim is another Trump accuser?? It's hard to keep up.

I just heard Anita Hill on ABC with George Clintonapolis about the Kevenaugh accusation . She sounds like she is on Seconal. I was expecting her to nod at any moment.

I see you corrected another error. Bravo.

I guess if one liberal professor could shoot himself in the arm to protest Trump, it's no big sacrifice to make up a story from 36 years ago and sacrifice your veracity. Schummer is behind this whole thing. Schummer, a man who has never held any job other than politician.

If this doesn't wake up the republican voter, nothing will. The republicans should note that democrats/socialists/liberals are definitely in it to win it. They will sacrifice their own to gain political power. republicans won't. republicans won't even support the President, much less fight for the proletariat. If the republicans were as committed as the democrats are, we wouldn't have anything to worry about. Amazing and sad. Where are the Watauga County Republicans concerning a probable false allegation to bring down a Supreme Court Justice? Same place they were for the farmer out in Aho who had tin pot despots crawling all over him over a year old, pre-existing septic tank. Same place they were for the young women who owned a gas station in Foscoe who had her livelihood destroyed by NGO collusion with government.

We can all remember the same Democrat's outrage and their call for Bill Clinton's removal from office when Juanita Broaddrick accused Bill Clinton of violent rape. Admittedly he was only an adult Attorney General of a state at the time of the actual rape and not a teenybopper where there was no rape of a girl who can't remember where or when, but just the same, Shummer and Feinstein and Beevis's father demanded Clinton leave the political scene and take his enabling wife with him.

Ford claims she is afraid to fly. If she was serious she would be conferring with her attorney as they cruise across the country by train. Or, because Soros is paying she could come by private jet, landing any time she needs to have her panic attacks. Also she is a psychologist and we are the ones who help with fear of flying. Give us a break.

The Judiciary Committee offered to come to her. She should have an FBI investigation first, be allowed to review the investigation, and then decide whether or not to testify but not under oath. Like Hillary says, women must be believed.

The woman looks like a loon. You can tell something is seriously wrong with this wench. She looks like a women that I work out with at the Wellness Center - a prune face and simply not all there. No way this wacko gets on the stand. Dumpocracts have not intention of letting her put another smudge on the dumpocrat brand. This is all show and no go. I love watching democrats (notice lower case) lower themselves to formerly unobtainable low standards. From Ashley judd talking about burning down the White House to a whole host of celebrities proclaiming they would leave the US if Trump was elected, the left is truly unhinged.

And let's not forget the most famous of all stupid, liberal inspired comments - "Machts Niches Bitches." They still can't live that one down. LOL! Stings don't it.

From a political cartoon: Before me too movement “he said, she said”. After me too “she said, he’s dead”.

The accuser's lifelong friend whom she said was at the party denies it.
https://www.chicksonright.com/blog/2018/09/22/female-student-at-party-of-alleged-kavanaugh-attack-speaks-out/

I watched every minute of the Kavanaugh hearings. The man is a giant, probably the most accomplished candidate ever. But Fox went out and polled people and 50% have turned against him. How many do you suppose said I am sorry but I did not watch the hearings so I don’t feel well informed to answer your poll. Polls of the average uninformed people are useless.

I don't care what a high schooler or college freshman did. If it wasn't a rape or murder or a robbery and it was just some dumb adolescent behavior, so what. All this self-righteousness coming from the party of Kennedy and Clinton is ridiculous. Theirs was on going adult behavior and either one would be re-elected (if totally up to Democrats) to the highest office in the land today if they could run today.

Yes Sark, the kids at ASU are back. And right away they are having wild parties in our neighborhood. I keep wondering if some of them will do some adolescent dumbness and should that deny them a great future? Of course not!

I am watching Kavanaugh's interview on FOX. He is not lying.

One problem no one talks about is there are many poorly trained counselors who see certain symptoms. They stupidly decide that his pattern of symptoms comes from being sexually molested. Then they clumsily plant the idea—must have been your father etc. Some therapists have been successfully sued by the accused person.

Ford says that in therapy she discovered she got ptsd from the incident. Sure did a lot of damage. She went on to get a doctorate in Clinical Psychology. This degree is one of the most rigorous degrees available. There is also a large number of competitors for acceptance into the doctoral school. Then there is a lot of competition to beat out for her university job. You have to demonstrate unusual excellence at every step.

Ford claims her memories came up during therapy. But, there was no mention in the therapist’s notes of Kavanaugh. In order to defend ourselves in a malpractice suit, we therapists have a rule “if it is not in our notes, it never happened.” Our notes are for CYA.

Our side finally showed some smarts I never knew they had. The evil dems got outfoxed. They thought they were going to have the Republican men interviewing Ford. We are going to use a woman instead. The suckered dems are screaming foul. LOL

Ford doesn't wash her hair. Lack of personal cleanliness is a sign of mental illness.