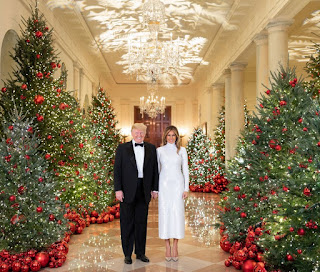 Can you believe it? Vogue magazine attacked this beautiful photo ( and of course really created a backlash).

Vogue writes; "The photo, which was reportedly snapped before the first couple headed to the Congressional Ball last Saturday, shows FLOTUS and POTUS looking almost like cardboard cutout versions of themselves. And they are very, very smiley—despite this season of indictments, and the dissolution of their flagrantly fraudulent charity organization. They are also holding hands, a move that is famously out of character for them."

So according to these Libs, the Trumps have no right to be happy after the drubbing "we Leftists have given them." The Trumps are suppose to be down on the mat for the count.

Anyone who does not believe the Leftists have gone utterly mad, just is not paying attention. Folks, you can’t make this stuff up.
Posted by Blogger at 11:23 PM

Conservatives as such whinny, thin skinned, snowflakes, with their pettiness. The Obamas were always too busy addressing major problems facing ordinary Americans to worry about negative attacks by the conservative propagandist. Trump’s is just like a spoiled, greedy child.

Trump should pull all US troops out of Afghanistan as well.

No ethical, competent, professional person is going to trash their future career or legacy, serving Trump!

Trump’s dangerous, ignorance, incompetence and childish temperament is on full display as he failed to read ( if he can read )the critical letter from Defense Secretary Mattis. Trump learned days later from Fox News, Mattis’s letter was very critical of Trump. Trump’s firing Mattis immediately will endanger American soldiers around the world for a long time as the incoming Defense Secretary will be blindsided by information lost in the sudden transition.

The Leftist media has fallen all over themselves praising Michelle Obama's yellow tarpaulin she wore with Sarah Horse Face Jessica Parker. Michelle looked like she had been caught in flood up to her tweezle in a Chinese glitter factory and Yao Ming threw his raincoat over her. $4,000 boots? Where are they from, Hookers R Us ?

CLICK HERE AT YOUR OWN RISK. BECAUSE YOU CAN"T UNSEE THIS

Expect Trump’s disapproval ratings to climb as the New Democratic House exposes all of the evidence Republicans we’re hiding. Trump’s best people are now gone so he will become more volatile, exposing his ignorance and un professional temperament. https://projects.fivethirtyeight.com/trump-approval-ratings/

Expect PRESIDENT Trump to get re-elected as dumpocrats and their news media lapdogs continue with their deranged yelling (see smoke shop employee as a prime example). Trump continues getting the country's best and brightest when and where he needs them which is why he is getting so much done. And a fake indian, an old white guy socialist, and a cashless women is California is all the dumpocrats can put up? LOL!!!!

I love the US Embassy in Jerusalem. Trump did it when 70 years worth of Presidents couldn't.

I just love the White House Christmas decorating this year. President Trump and his attractive wife Melania really did a good job. This is what the White House should look like during Christmas.

White House Christmas Decorations are what you have to take pride in after all of the Trump lies, corruption, cronyism, greed, incompetence and cruelty? Enjoy your moment, not that I agree but Christmas Decorations are a matter of opinions and if you like them good for you. Trump’s hires two people who knew how to do there job Sarah Sanders was extremely good at lying and Stormy Daniels was a professional at her job.

Wonder if Stormy was better at her job than Monica Lewenski? Oops, I mentioned something liberal lemmings ( you) absolutely hate The fact BillaryvClinton and most all Dumpocrats are truly evil when it comes to personal conduct. LOL. Stings don't it

you opened yourself up to that one. That's what's known as low hanging fruit. Perhaps you should just shut that drool splattered mouth of yours - it ain't going to well for you pardner. Then again, liberal socialist sheep lemmings have never been known for clear, pragmatic thought. LOL