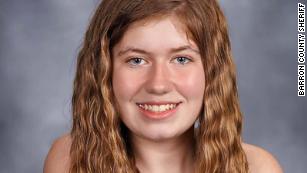 I am listening to news coverage of the Jayme Closs  escape. All the government officials including Sheriff, DA, FBI are congratulating themselves on their hard work. They failed, they should be apologizing and they should be only congratulating themselves on the arresting of the kidnapper made possible only by Jayme's description of the kidnapper. You would think the local government had pulled off an heroic rescue. Two citizens helped her after she had helped herself. Both her parents were killed. Self defense saves people. Were her parents armed? The young girl was gone for 3 months while law enforcement failed. Now they congratulate themselves like they had anything to do with her rescue. They (government officials) are giddy and falling all over themselves in congratulating each other on a job well done. BS!
Posted by Sarkazein at 11:33 AM

It was private citizens who saved Jayme Closs. In this case, law enforcement had nothing at all to do with her safe return home. With that being said, law enforcement were just as happy to see her returned as anyone. This may be part and parcel of the leftist attempt to make the masses subservient to cradle to grave socialism. Keep the sheeple convinced they have no part in security, prosperity, or happiness as those three relate to society.

Now folks, we can't have vigilante citizens saving kidnapped girls now can we? It makes the left's narrative look as false as it truly is. Great job to the private citizens who quickly figured out who Jayme Closs was and made her safe.

JohnnyRico- At the time I was writing this post there was a press conference with all the heads of their departments standing at and next to the mic. One at a time they thanked each other for the great and tireless job they did, as if they had rescued her. I understand that they are happy and relieved she is safe, but not once did I hear an apology for their failures. It sounded like the celebration you would hear if the high sheriff himself had kicked down the door while the FBI agent in charge carried the young girl to safety in a burning fire.

I saw that press conference too, and I found it disingenuous that the private citizens who saved her weren't brought up front to stand with law enforcement. We should make heroes of private citizens, not ignore them. Good thread, spot on as usual, Sark.

SCOTUS ruled that it is not the Constitutional duty of police to protect people. It is the duty of the individual to protect themselves and their own.