The Intellect Going Where No Intellect Has Gone Before 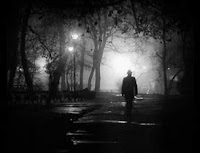 Published on other blog

Harvard professor Richard Alpert later Baba Ram Dass, early on was experimenting with LSD. After getting fired, He went East to recapture those non rational experiences.

He describes what happened when he met his guru: His guru spoke to him, then, like a computer fed an insoluble problem, "my mind just gave up. It burned out its circuitry," Ram Dass said. From then on, Ram Dass searched for and taught ways to have altered states of consciousness.

The famous 1500's A.D. Spanish mystic St John of the Cross wrote a treatise called "The Dark Night
of the Soul." These days it has become customary by new agers and other religious people alike to use that title to indicate any religious crisis such as losing faith or becoming spiritually depressed etc. But St John’s meaning is far more profound and complicated.

For St. John, the Dark Night is when the intellect encounters other levels of awareness for which it is incapable of accessing. The Intellect Going Where No Intellect Has Gone Before." (Apologies to Star Trek)

The Dark Night is when the intellect flat lines as it tries to penetrate the supernatural.

One of the best ways to approach St. John is to come at him first from other systems of mysticism. What mystics of all faiths have discovered is that, before you can enter the mystic realm, the rational cognitive system must shut down.

In Zen for example, an unsolvable Koan (sound of one hand clapping, etc.) brings the mind (the intellect) to its knees. In Hinduism, meditation systems accomplish this state by overloading the intellectual processes. Islamic Sufi’s dance and twirl. African and American Indian Shamans dance and beat drums. Others, such as Buddhism, underload it. The outcome is the same. The cognitive processes that function in the natural realm flat line and the person breaks through into direct encounters of the supernatural.

The Christian’s technique was rediscovered early in the 20th century. In this country, in California and in Wales, the process of speaking in tongues emerged. It has become by far and away the fastest growing segment of the Faith, accounting for most of the church growth today.

The Holy Spirit has promised if we invite Him, He will set up his base of operations in our core. From there He guides. So, Christians have discovered if they turn their awareness inward, to their center, they hear the Holy Spirit praying. When they give vent, the intellect shuts down and they enter the supernatural.

Back to St. John. St John taught that God challenges our rational system until it accepts the fact that the mystic realm is above its paygrade.

". . . .it is God Who is now working in the cognitive ; He binds its interior faculties, and
allows it not to cling to the understanding, nor to have delight in the will, nor to reason
with the memory. For anything that the mind can do of its own accord at this time serves only, . . . .to hinder inward peace and the work which God is accomplishing . . . . p. 67

Thus, the Dark Night is actually a negative experience only from the point of view of one’s intellect. This darkness is not a pleasant experience for the intellect which believed itself capable of understanding everything. St. John explains:

. . . .the Divine wisdom is not only night and darkness for the mental, but is likewise, affliction and torment . . . because of the height of Divine Wisdom, which transcends the talent of the mental and in this way is darkness to it." p. 100

On the other hand, from the point of view of the entire psychological system, The Dark Night is a positive experience and has a happy outcome.

"When God leads the soul into this night of sense in order to purge the sense of its lower part and to subdue it, unite it and bring it into conformity with the spirit, by setting it in darkness and causing it to cease. . . . He brings it into the night of the spirit, and (although it appears not so to it) the psyche gains so many benefits that it holds it to be a happy chance to have escaped from the bonds and restrictions of the senses of its lower self. . . ." p. 74

Great post Blogger. It’s true when we turn our self awareness inward, God speaks to us . Non-believers I suspect feel the same thing but ignore it as they almost hate themselves so much that they eschew God. Perhaps this explains noneymouse and his unprovoked attacks on Christians as well as the unending hate liberals perpetrate on society