What Does God Expect When He Speaks? 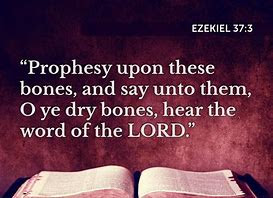 After I wrote that God informed me that Trump was to be president, an Anonymous commenter wrote:  "What an awesome responsibility to have a direct, conversational, linkage with god."

I don’t know if this Anon is the one who sits in the seat of the scornful (Ps 1:1) But I am going to take the question as serious. Anon, you are correct, hearing from God is an awesome responsibility which requires action on our part.

St Paul wrote that he wanted all Christians to prophecy ( 1 Cor 14:5). So Anon, it follows if you are to prophecy, you must first be able to hear God.

Prophecy has a number of elements. One includes foretelling. Another is prophecy as causative.

In causative prophesying, the believer hears what God wants. Then prophesying causes God’s will to be done. God created the universe by speaking it into existence. Now he does creative work by the spoken word of the prophet.

The Old Testament is full of stories of causative prophesying. One of the most dramatic account is when God told Ezekiel to prophesy over a valley of dry bones. The skeletons stood upright and became an army. I always believe God placed over-the-top stories to illustrate what is possible when we are operating at the top of our game.

In the case of Trump, the Lord began to alert the prophets in the early 2000's. He wanted Trump to be president. Several taped the prophecies. Others wrote books. It became the prophets’ work to take what was in the spiritual realm and declare it manifested in the physical.

Yes it is an awesome responsibility when God speaks to us.

(There are many books on hearing God. Right now, I am halfway through the best one I ever read. You can get it by downloading Kindle Amazon App for $9.19)The Prophetic Voice of God: Learning to Recognize the Language of the Holy Spirit Kindle Edition  by Lana Vawser)
Posted by Blogger at 3:15 PM

Do you really believe Trump is the 13th disciple? You do realize, the rest of the world is under no obligation to share your voices or religious beliefs?

God really told you he was going to send a lying con artist lacking a moral compass, lacking ethics, lacking decency to save Christianity?

King David sent a man to get killed in battle so he could have his wife. God called David a man after His own heart. Then He let His Messiah come through David’s lineage. God says to you “my ways are not your ways.”

Trump winning the 2016 election against 16 Republican primary wannabes and Hillary Klinton IS an absolute miracle.

There may have been a half a billion dollars spent trying to defeat him.

While he has faults, as does any man, he is our best hope for bringing some sanity back to America.

Also Wolf part of that miracle was that he did not win by wracking up the popular vote. Instead he created a landslide in the electoral college. Many of us believe that had to be God who figured out how to do that.

Anon, you wrote: "You do realize, the rest of the world is under no obligation to share your voices or religious beliefs?"

I am very curious to know why you felt it necessary to write that.

Trump was assisted by the Russian Government, Russian mob and the Saudi Government.

Trump was assisted by Satan, not god. It's more than disappointing that you don't know the difference.

"Satan, not god"- What the liberal is trying to write is that Satan let him down with the election of President Trump.

In other words the liberal is saying Satan screwed him.

I think Anonymous, in his Biblical analysis, is referring to third and forth trimester abortion.

"Anonymous said...
Trump was assisted by the Russian Government, Russian mob and the Saudi Government.

The village idiot is starting to come unhinged again. Look how rattled the idiot is in his barely understandable, irrelevant posts. He might be taking another trip by to his psychiatrist real soon. He's almost frantic in his rush to hurl a one line quip that says essentially the same thing said a few moments before. It's a sure sign of a psychosis. Noneymouse coward is one messed up individual.