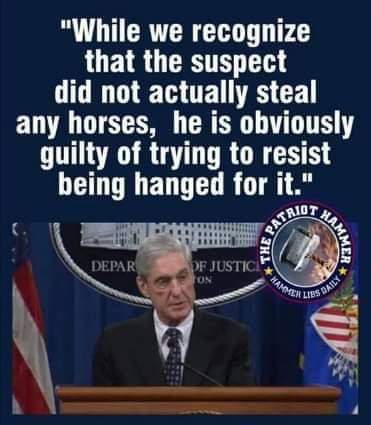 In trying to set things up to go after Trump Jr, the crazy Dems salivated over the idea that it is a criminal offense to solicit opposition research from a foreign country. Could they not hear the echo in their heads of "Hillary, Hillary, bought and paid for the Russian dossier?"

The disingenuous Socialist/Communist/Dems also got Mueller to say that the Russians supported Trump. No one reminds people that Putin was furious with Hillary for trying to interfere in their elections. (Google it)

FOX News' Chris Wallace opines on former special counsel Robert Mueller's testimony at a House Judiciary Committee hearing Wednesday. Wallace said the hearing has been a "disaster" for Democrats and for the reputation of Robert Mueller. The 'FOX News Sunday' host remarked it doesn't seem like Mueller was "very much in control or charge" of his investigation and final report.

CNN’s JEREMY BASH: I have to say, Brian, with all reverence for Bob Mueller and his lifetime of career service . . . I have to say that far from breathing life into the report, he kind of sucked the life out of the report. I thought he was boring. I thought in some cases he was sort of evasive, he didn't want to explain or expand on his rational. He seemed lost at times.

NBC News political director Chuck Todd called the optics of the hearing a "disaster" and the special counsel did nothing to advance the cause for impeachment.

The unhinged dems/socialists/communists/ spent most of the morning foaming over Trump’s asking members of his staff to fire Mueller. They wanted Trump prosecuted.

Number 1, Trump never fired Mueller nor interfered with the investigation.
Number 2 Under Article 2 of the Constitution he could have fired the whole damn bunch if had wanted to. They all are in his administration.
Number 3 The story is that a number of his staff stopped him. In my book he gets credit for hiring people like them, as well as credit for not firing any of them when they stood up to him.

Just listened to Shifty Schiff and Nasty Nadler, the chairmen of the hearings today. Schiff said his blood curdled when he heard that taking information from foreign countries may now be the new normal.

They are so dishonest that it would be a waste of time to point out Trump did not pay for information from Russia . Hillary did. Both chairs lied to the people so blatantly about the whole hearing that I really expected them to be struck by lightening or at least see their noses growing.

The only thing worse then these lying chair persons is the total stupidity of the people who believe them.