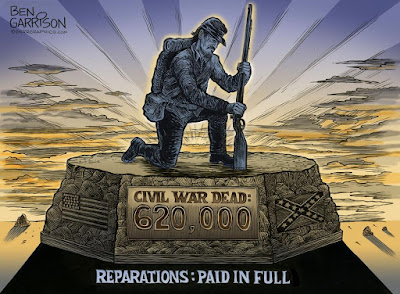 The Civil War and WW2. Hitler was no bro.

Liberals will try to dismiss the blood of your forefathers as being a mere down payment or what was expected of them anyway. It runs contrary to their narrative of wealth re-distribution (reparations is simply another name for that) which is what they've wanted for a long time now. Except that they will retain ALL of their wealth when the redistribution part comes, bet on that.

Notice how the left refuses to comment on this thread Sark. It's way, way too inconvenient for them to talk about how Republicans, white Republicans nonetheless, died by the hundreds of thousands in putting down an enlightened rebellion and freeing blacks as an ancillary benefit of doing so. They won't touch it. Reparations are not being discussed because liberals care about blacks. Like anything else (forced vaccinations, welfare, gun control, climate change/carbon tax, reparations), it's about power and controlling others. Reparations will suppress one group for the supposed benefit of another. Talk about stoking racial tensions and creating different classes of people!!!! That's how the balance of power works for liberal socialist sheep - put classes or races against each other and then use the resulting conflict to gain even more power.

I am with you JR. Liberals/progressives only are motivated by desire for power. Meanwhile if they destroy our country, all the better they say.