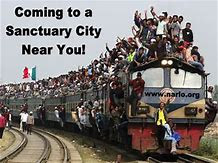 "On Thursday, August 15, U.S. Immigration and Customs Enforcement (ICE) published a news release announcing the arrest of fugitive Oscar Pacheco-Leonardo, 33. Pacheco-Leonardo is a Honduran national who was removed from the U.S. to Honduras in July 2006 and subsequently illegally reentered the U.S., which is a felony offense.

The arrest was made nearly two months after the Mecklenburg County NC Sheriff’s Office refused to honor an ICE detainer, instead releasing Pacheco from custody following his arrest on charges of first-degree rape and indecent liberties with a minor."Welcome Crimal Aliens

Mecklenburg County Sheriff Garry McFadden has blamed the releases on low bonds being set by judges in the cases, arguing that the law requires the suspects to be released when they post bond, while an ICE detainer is merely a “request.”

“This is a world turned upside-down. … Something screwy is going on in North Carolina,” Napolitano said on “Fox & Friends,” adding there is a “danger to public safety” when suspected violent criminals are released from custody.

Napolitano said bail is usually not set “low” when the case is an alleged “crime of violence.” He said when he was a judge in New Jersey it would have been “inconceivable” for him not to make sure a suspect freed on bail in his courtroom was turned over to a separate law enforcement agency on other suspected crimes.

“It would violate my oath to uphold the law.”

According to data obtained by WBTV, 489 detainers were declined by law enforcement across the state of North Carolina since the fiscal year began last October.

Sark...our town does not cooperate either, as per their website.

"The Boone Police Department does not generally report arrests to ICE. It is rare that officers would even ask your legal status, as we do not have the authority to enforce immigration laws." I suppose they don't think for themselves but from the higher ups...liberal mayor and officials.

Charlotte probably advises the ones released to come to the mountains and seek refuge.