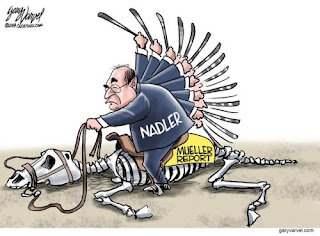 I have been trashing my mind today by listening to the House Judicial Committee persecuting Corey Lewandosky. The hearing was so disgusting, I can’t even try to write about it other than Lewandosky is a true patriot and the Dems are evil.

The four takeaways I will mention however, are the following:
Because the Mueller report on collusion is ended, the Demoncrats have switched to obstruction of justice, specifically Lewandosky’s knowledge of whether or not Trump threatened to fire Sessions if he would not limit the witch hunt. Lewandosky finessed that one like a pro. One Republican finally did ask Lewandosky if he realized that under the Second Amendment Trump could fire anyone he needed to? The answer was "yes"  That should have closed the witch hunt before it even began.

Chairman Nasty Nadler kept insisting that they were not in an impeachment hearing. Then when he changed the rules arbitrarily, he claimed it was impeachment. Then he kept threatening Lewandosky with contempt, citing rules of impeachment hearings established in the Nixon impeachment. Nadler knew he can’t start impeachment without the vote of the House and he does not have the votes so far. The whole thing is a farce.

Over and over Lewandosky protected himself by citing the president’s executive privilege letter to the committee. Many of the committees declared the president’s letter illegal. If they all weren’t typical stupid Dems with a stupid audience, they would confess that in a challenge between two government branches, the legality would have to be settled by the court, most likely the Supreme Court.

Finally, many Republicans said that this committee was historically a significant one. They reeled off a number of truly important issues they can’t work on because of Nadler’s love of the flash bulbs.
Posted by Blogger at 7:15 PM

Even though it was against the rules, the Nastys brought in an outside hired gun–a real SOB. They gave him a half-hour, instead of the customary 5 minutes.

I hope you readers catch it. Legislators have to be a little careful. Go over the top and they may get backlash back home. A bought and paid for assassin has no such constrictions and this one went all out.

When it came the Republicans turn, they refused to play, calling the whole farce illegal, and went home

I hardly got this post out before they switched again. Now it is a telephone conversation. I am getting whiplash.