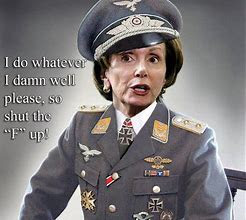 Excerpted from today’s Wall Street Journal Oct 2 "By forgoing a full House vote to authorize an impeachment inquiry, Mrs. Pelosi has ramped up the partisanship. Instead of moving ahead with the full backing of the elected representatives of the American people, she has launched the Trump impeachment by personal ukase."

Mrs. Pelosi has no precedent for what she has done, and by eliminating a House vote, she has denied the House minority the opportunity to be heard before Congress begins exercising its most formidable constitutional power short of declaring war: the process of removing an elected president."

"When one party silences the other by gaveling down debate, denying subpoena power, and refusing to hold votes, they are hiding from accountability to their electorate."

"An official impeachment proceeding comes with powers that allow Congress to compel documents a president might otherwise withhold from normal oversight. If all it now takes for a committee to exercise these daunting powers is a speaker’s say-so, we are in new territory."

"The decision to proceed with impeachment by fiat, Mrs. Pelosi has set many disturbing precedents—none more terrible than the idea that all you need is a willing speaker and you can put a congressional committee in permanent impeachment mode, using its powers to try to overturn an election." (Emphasis added)
Posted by Blogger at 9:17 PM

Numerous people including Lou Dobbs and Mark Levin and others give reasons for suspecting Shifty Schifts committee lawyers actually helped the rogue CIA “whistleblower” craft the letter. Levin points out that Pelosi announced impeachment before she saw Trump’s telephone transcript. She already knew what the spy would charge. So she jumped ahead.

So Trump is challenging Herr Pelosi today “Put up or shut up!”

Here is something very interesting.

Now, unearthed records reveal that Paul Pelosi Jr. was an executive of a gas industry company that did business in Ukraine – and his mother Nancy Pelosi was featured in one of the company’s promotional videos.

wow! I googled Howley and went to news. Hope Hannity gets on it. blogger