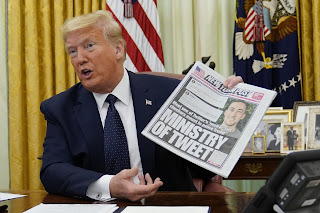 One of Trump's ongoing tantrums concerns Facebook and Twitter and their flagging his numerous claims/outbursts as patently untrue. So in revenge, Trump is proposing a full repeal of Section 230 of the 1996 Communications Decency Act.

Section 230 shields website owners/managers from legal suits arising from user posts and content. The website itself, then, is not subject to libel ligation. Websites are also afforded the right to moderate and restrict comments/content/material that they deemed, “obscene, lewd, lascivious, filthy, excessively violent, harassing, or otherwise objectionable.”

A repeal of Section 230 would open us to defamation litigation for your comments. Following Blogger's retirement, this blog has followed the constraints of a full Section 230 repeal.

Trump wants to repeal Section 230. Do you agree?

Popular posts from this blog

January 18, 2021
Following the January 6th attack on the Capitol, the seditionists have gone into deep hiding!  Blogger, Sark, Guy, Wolf, and the rest have sunk their heads down in the hopes that we will overlook their multi-year cooperation in this anti-American farce that is Trump-ism.  Even the the aptly-named "Nobody" who attempted a competing blog following our departure from racism/fascism/authoritarianism has deleted  her own content after the coup d'etat. (Note that "Nobody" is the reason why we are moderating comments for racist and fascist content...probably explains the blog deletion).  Hear it here and hear it loud - fascism and authoritarianism are not welcome here.
2 comments
Read more

Biden Is Filling His Cabinet With Pro-War Sycophants

December 09, 2020
"If you were hoping for a change of heart from Joe Biden after a decades-long career as a hawk, we've got bad news: his incoming team helped shape some of the most militaristic policies of the Obama administration." Read here
Post a Comment
Read more

January 10, 2021
What we saw on Wednesday was the logical result of years of incoherent ramblings from an unhinged and incompetent President. Trump stoked and prodded his own army of imbeciles to storm the Capitol, resulting in multiple charges of terrorism.  One such imbecile described his own participation as religious, saying : "'Lord, is this the right thing to do? Is this what I need to do?' He says he felt God's hand on his back, pushing him forward." Sound familiar? Blogger and his deranged ilk have spouted similar "God told me so" ramblings for years.  Is it any wonder that Blogger, Sark, Guy, Wolf, etc. no longer contribute to this blog? They finally understand their role in this insanity. They finally understand the consequences of their stupidity.  Blogger et al. are culpable and they know it.
Post a Comment
Read more